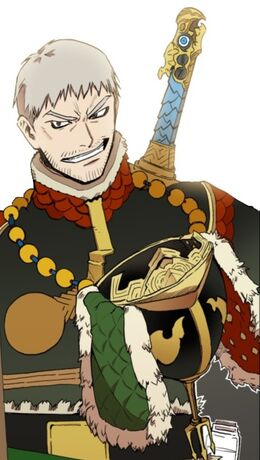 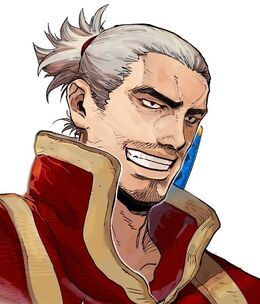 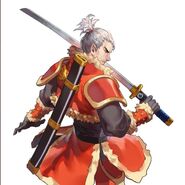 During the events of Season 1, he took Sora under his wing and taught her how to fight as well as teaching her the Moonlight Slash.

Like many from the Zara Guild, he's considers him a traitor for joining Giga.

Was a close confidant when they were in Zara Guild together. At one point it was shown that Master Swordsman asked Armes in which she replied that she would only if he beat her in a fight.

After Armes died in real life, he attended her funeral.

Considers him a close friend from their time together in Zara Guild.

When Hardcore Leveling Warrior was revealed to still be alive, he alongside some others rushed to Dark Land to aid in the search.

Master Swordsman puts on his helmet and Sea Dragon Sword opens 2 out of it's 3 eyes, which opens his 'true' Personal Attribute at 50%. In this form, Master Swordsman is surrounded by a transparent fiery blue light armour in his shoulders and upper thighs.[7]

In this form, it seems like his strength, attack power and swordsmanship are greatly enhanced. Master Swordsman believed Guan Yu was reckless for challenging him when he was in this form.[8]

Enhanced Attack Power: Master Swordsman is able to duel with the powerful player Guan Yu and not be at a disadvantage.[8]

Enhanced Swordsmanship: In this form, Master Swordsman is able to use the powerful sword skill, Lacerate (切).[8]

Retrieved from "https://hardcorelevelingwarrior.fandom.com/wiki/The_Best_Swordsman?oldid=25960"
Community content is available under CC-BY-SA unless otherwise noted.