A skill used to move many people over long distances instantly.[1] The user can transport a large number of people, objects, or parts of the environment without requiring physical contact with all parties involved.[1]

The skill consumes a large amount of Mana as Choco Bibi needed a mana buff to increase his mana around a year and a half before the start of the series.[1]

During the Subjugation Round, Choco Bibi used Mass Teleport to save his team from a Blast from Octonash.[2] 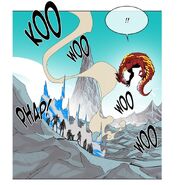 대규모 공간이동 translates to Mass Teleport. This is the translation that is used in most fantasy genres, be it novels or video games.