The Map of Taste

Map of Taste[1] is a skill of Sora's taster class.

A skill that makes Sora stronger as she consumes various foods that exist in Lucid Adventure.[2] Sora first unlocked this ability after unlocking her taster class.[1]

The map of taste first appeared as an unexplained skill icon in Sora's skill window, but Sora had a feeling that she got stronger whenever she ate food.[2]

During Sora's duel with Lila in the PvP Round semifinals, Sora completed the first page of the Map of Taste by activating the final taste, The Taste of Never Giving Up, which restored Sora's HP from 0 to 1 and allowed Sora to change jobs from a swordsman to a great sword warrior.[3]

After consuming the Hohoee Chips (Kimchi Flavor), Sora completed the high-level food collection for the B class Taster class and her taster class got upgraded from C class to B class. The map of taste changed from an unexplained skill icon in Sora's skill window to a map form once Sora collected a certain number of foods.[2] The new form of the map of taste showed the complete food lists that Sora needed to consume, the level of difficulty to acquire said food items and the stat enhancement that each food item gave Sora.[4]

The foods that Sora had already consumed prior to the map form being unlocked, such as Hohoee Chips (Kimchi Flavor), Fire Flower Salad with Salamander Sauce and Moon Rabbit's Half-Moon Rice Cake showed the stat enhancements that Sora gained by consuming them, while the foods that had not yet been consumed by Sora did not show the stat enhancements that Sora would gain from consuming them.[2] The list contained a thousand food items.[4]

During Sora's battle with Apple, the Map of Taste effect was activated when Sora consumed the Heavenly Peach Root, Grilled Angel Fish and Hidden Holy Water which led to Sora gaining 10x the healing effects from food and 2x the extra buffs she the buffs from food.[5] 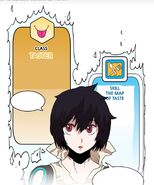 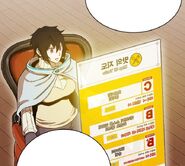 Retrieved from "https://hardcorelevelingwarrior.fandom.com/wiki/Map_of_Taste?oldid=50006"
Community content is available under CC-BY-SA unless otherwise noted.