In this state, his aggression, speed, power, stamina and durability were raised and he was able to quickly recover from blows and counter attack immediately.

Kim Gu was previously driven into a corner by Kang Dong-hyung's (Korean: 강동현) kicks, but after entering 'Mad-Max' mode, he knocked him out with a J.R.I.R. Crush.[1] When Kang Dong-Hyung regained his consciousness and attempted to attack Kim Gu, but the force and pressure from Kim Gu's spirit forced him to his knees which left him embarrassed.[2][3]

In this state, he was able to take the full swing of a baseball bat to the back of his head and not even flinc and deliver a blow strong enough to break a person's shin.[5]

The problem was that in this state, Kim Gu could not distinguish friend from foe and attacks indiscriminately. He attacked Kim Byungsik when he attempted to calm him down[5] and had to be headbutted to the ground in order to regain his sense.[6]

It is a hidden skill straight out of a cartoon character that is activated when Tac's precious comrade dies in front of him.[7]

Tac's eyes glow bright red and he goes berserk and becomes extremely powerful. According to HCLW , it is a super overpowered skill.[8]

The buff has a time limit so Tac's opponent can survive if they are fast enough to avoid his attacks.[8]

A blow from Tac in this mode was capable of severely injuring HCLW, despite the latter absorbing the blow with the Sword of Honor.[8] 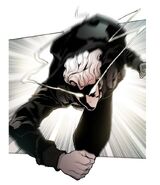 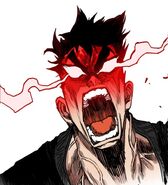