Dolce is a magic sword and one of the 6 swords of the Majin. It is used by Light.[1]

It is a one handed sword with a a unique double-helix design.[2]

It is a weapon only 'Majins' can use. Just by landing it, it neutralises all the magic of the target.[3]

It was first summoned by Light after he turned into a Majin.[2] Light was then able to summon it without becoming a Majin in the PvP Semi finals.[4] The reason has not been given.

Light was able to use Dolce to easily block the gigantic Sword of God used by The Ultimate Healer.[5]

Majin Light was able to use Docle to disable the #1 Ranker powered HCLW's magic immunity.[3] 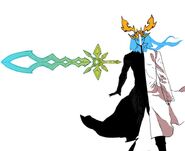 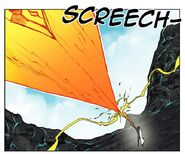 Retrieved from "https://hardcorelevelingwarrior.fandom.com/wiki/Magic_Sword_-_Dolce?oldid=24083"
Community content is available under CC-BY-SA unless otherwise noted.