Lime[1] is and NPC in Lucid Adventure and is one of King Yopi's closest confidantes. She serves as the Supporter[1] of Yopi Land and is one of the few NPCs that Yopi trusts.

When Lime was a low level NPC, she had the appearance of a classic slime with two yellow eyes. After she leveled up, she morphed into a young child.

As a High Level NPC, Lime morphed her body to that of a young woman with yellow eyes, she also changed her appearance to that of a maid. Her entire body is made up of green slime. 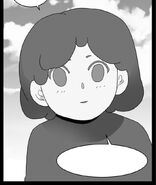 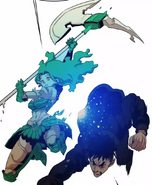 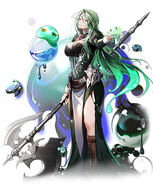 Lime has a loyal and caring albeit robotlike personality. She often acts like a robot when following Yopi's orders and hasn't given much opinion on any events or stuff that's happening. She does however show her concern as when Pooh Upooh ordered her to run away, she denied the order and said that she will protect Pooh Upooh. When Pooh Upooh was kidnapped, she was worried and immediately ordered to prepare a group to save her.

Lime is a beloved NPC of Yopi. As the one who raised her, Lime thinks highly of Yopi and is loyal to a fault to him. When Yopi gave her name to her, she smiled in appreciation.

Lime and Pooh Upooh are like sisters. Lime cares about Pooh Upooh that she is willing to put her life on the line to save her multiple times.

They are good friends. Lime cares about Taek as well as she sacrificed her life just to save him and entrusted Pooh Upooh to his protection. At first, Taek was weirded out by her until she saved him by giving him a gas mask.

Lime is an incredible healer as she is able to heal anyone from any fatal wounds (excluding instant kills or one shots) and can fulfill a versatile mode. She can be an excellent supporter as she is able to defend her allies with buffs and disrupt the opponents by either ensnaring them or distracting them with numerous slime blobs or even a powerful melee damage dealer using her Night Mode.

Healing: Lime's most notable ability is that she is able to heal any type wounds, fatal or not, and heal everyone all at the same time.

Skill Analysis: Lime is able to analyze the skill or effects used once she ensnares the target.

Lime assumes an armored form and summons a battle axe. In this mode, she is on the offensive and engages the targets head on rather than supporting from the back. Her attacks in this mode are also capable of covering wide ranges of an area and she also has considerable defenses in this mode as well as she took on multiple giant forest golems all and destroyed them all by herself.

Lime's main role is to act as a support, healing her allies and disrupting their opponents but whenever she is alone or has to deal multiple enemies all by herself or whenever her allies are having trouble, she assumes her Night Mode and engages the opponent in melee combat.