Totoras (Martial Arts Combat Round Only)

Lila is a player who was once a mercenary for Giga and victim of the workshop due to borrowing money to help her children. She hatched a plan with Taoist Kim and Hardcore Leveling Warrior in order to escape the workshop, but was put into a barrel.

As of Season 2, she was saved by Gong Won-Ho by means of him pulling her out of her barrel and was believed to be still playing the game. She was the one who told Sora that Hardcore Leveling Warrior was still alive when they crossed paths again. As it turns out, Gun-Ho retrieved both barrels, and Gong let let her out of her own barrel. While He made a deal with Gun-Ho to go through Gun-ho's experiment in exchange for Lila's life, Lila was forced into the experiment and died as a result

Lila is an adult woman with short brown hair and a few wrinkles. She was shown wearing a long sleeved grey shirt and white pants.

Lila is a young woman with light brown hair and pale green eyes. Her appearance is similar to her real life self and might be a representation of her younger years. During the Subjugation Round, she was first shown wearing a brown turtle neck sweater with a small diamond shaped cleavage, green pants that faded into white, and dark brown leather boots. In her appearance before and during the PVP Round, she still wore the same attire but she no longer had a cleavage. Two years later, she now wore a large dark hoodie, green pants and shoes. 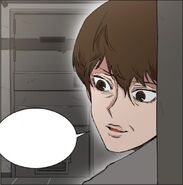 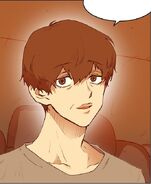 Lila is a calm and solemn person. Though she does seem to be easily annoyed as she had shouted at Ethan and Taoist Kim and told them to shut up. During battle, Lila is a perceptive and focused fighter as she analyzed her opponents while she fought and figured out what Hardcore Leveling Warrior intended when she grouped her with Sora.

She was quickly aware of how quick Sora was eating food to heal in seconds. Lila is a bit rude as she talked down Sora about her hard work. However, she's a very relaxed person as she had invited Sora to have a cup of tea with her during the semi-finals after she was defeated.

Lila willingly approached Chairman Kim first and borrowed his money for her child's surgery. Soon enough, Lila amassed a huge debt and found herself working under him in his workshop until she escaped.

Lila and Taoist Kim are fellow cellmates under Chairman Kim's Workshop and have known each other for a time it seems as they were neighbors as they casually talked to one another. They had an alliance although they were enemies during the Subjugation Round, she was angry at taoist Kim for kicking her on the sides. They became teammates after that and entered the PVP Round.

After Taoist Kim's sacrifice to save them both in the real world, Lila was concerned for her and had asked Hardcore Leveling Warrior what happened to her after the explosion.

Lila and Hardcore Leveling Warrior are fellow cellmates under Chairman Kim's Workshop, though she had met him when he was dragged down from the top floor. They had an alliance and Lila was his temporary teammate, as she left, she said that they had a business relationship. Lila was wary of Hardcore Leveling Warrior when she fought him in the PVP Round as it was rumored that he retrieved the Memory of Dragon Pearl.

Being under the Chairman Kim's Workshop, she was a mercenary alongside taoist Kim and joined the Combat Tournament under Giga's name albeit they were enemies in the Subjugation Round for a time.

Lila's teammate. They were shown having getting along with one another and were on good terms. Lila saved No Name from early execution during the semi finals against Hardcore Leveling Warrior.

Lila acted as Sora's teacher during the Subjugation Round as both of them had Ego Swords. Lila thought Sora was a kid who didn't know how to hold a sword but was interesting nonetheless. They met each other once again before the PVP Round and Lila was impressed by how Sora used her Ego Sword during the Siege Round.

When the semi-finals began, Lila was surprised by Sora's swordsmanship and proceeded to have a one on one with her. As Lila fought Sora, she talked down on her hard work and mocked her. Lila was shocked however when Sora awakened and was defeated by her. They were still on friendly terms as Lila invited Sora to teatime during the semi-finals.

They met again two years later and had a chat. Lila was the one who told Sora that Hardcore Leveling Warrior saved her life twice and is still alive.

Lila is a proficient swordswoman, as she was an acknowledged by Hardcore Leveling Warrior who wanted her to tutor Sora on how to use her Ego Sword, and an incredible chef. She is a fast swordswoman as she is able to turn multiple projectiles into food consequently, she was fast enough to slice Hardcore Leveling Warrior's Lacerate (切) in mid-air before it could even touch No Name. Combined with her Chef Knife, she is able to convert any projectile attack into various food items that grant different buffs.

As a Master Chef, her skill in cooking is incredible as she was capable of cooking a Divine Being's limb which was impossible to cook according to Sora with any type of fire.

The essence of her class type personal attribute of being a chef is being able to cook energy which means she turns attacks into food hence why her Ego Sword can turn attacks into energy.

Since she's the double class of swordsman and chef, she can perform a class change to access the extra hidden class of "Hell's kitchen: Mad Chef" once she reached the ultimate level of chef. As a result, it changes the usage condition of her ego sword. All her cooking related stats and skills become combat stats and skills.

Food Conversion: Lila is able to convert any kind of attack with just one swing of her Chef's Knife. There appears to be no limit to this ability as Lila was able to convert Lacerate (切) into food as well.

Lila's class is Swordsman as she is able to wield an Ego Sword which can only be wielded by Swordsmen.

Chef: a Class-type Personal Attribute that allows someone to use cooking-related skills.

All her stats and skills are all put into her cooking skill rather than attack, so she primarily fights with her ego sword which turns attacks into food. When she shifts into the mad chef, she becomes a "slaughterer" rather than "Chef"

At some point, Lila started a family and had children. After one of her children became sick and required treatment, Lila approached Chairman Kim and had borrowed money from him to pay for her child's treatment. However she amassed a large debt to him and found herself working for him in his workshop to pay her debts.

After Gong Won-Ho was dumped in his cell, Lila told him to shut up twice when he loudly complained. She also told Taoist Kim to be quiet and angrily asked if she was crying again.

Lila and Taoist Kim told their usernames in Lucid Adventure to Gong Won-Ho when he asked them for their nicknames.

Lila is properly introduced in the arc as a shadowy figure approaching the almost dead alliance between Team Dark, Team Yopy Land and Team Choco Bibi. Lila ignored the very injured Hardcore Leveling Warrior's protests and used the Tears of Lonares to heal the entire alliance. She then properly introduces herself as the last member of their alliance.

Lila teams up with Sora, Lime, and Tempest who were teleported somewhere just like the others in order to eliminate enemy groups after them. Lila intervened Sora and Cocory's fight, where she knew why Hardcore Leveling Warrior paired her with Sora and proceeded to showcase her abilities. After their fight was over, Lila had her blade at opponent's neck until she was kicked away by Taoist Kim, she proceed to curse the latter for her kick.

After the Subjugation Round was over, Lila left the alliance and reminded Hardcore Leveling Warrior as she left regarding their business with each other.

The character's name, 리라, can be translated as "Lila; Lyra; Lira". The author never gave the romanization that should be used so Lila is used by LINE Webtoon and