Ligos (Line Webtoon: Rigos) was a Great Demon that was once known as the strongest demon. He was a 5* ranked monster in the Combat tournament. He was killed by Hardcore Leveling Warrior during The Subjugation Round.

Rigos facing God of War with power of Nightmare (Episode 41) 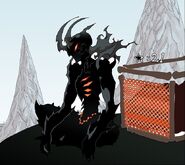 Rigos with his helmet cracked (Episode 40) 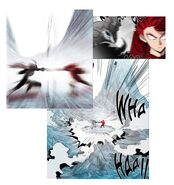 Rigos without his helmet (Episode 42) 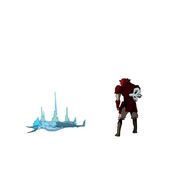 Rigos is extremely confident in his abilities and wanted to prove he was she strongest. His confidence was so high that he challenged the God of War himself and believed he could win.[1]

Rigos looks down on humans and consistently refers to them as "inferior beings".[1][2] He was even willing to let them entertain him during the Subjugation Round before killing them himself after he got bored. He felt it was an honor for any human to face him directly in combat.[3]

Although he looks down on humans, he is impressed if they manage to damage him such as when tempest damaged his helmet[3] and Hardcore Leveling Warrior was able to match him blow for blow and even overpower him for a brief period.[2]

In the past, Rigos used to subjugate humans. A year before the start of the series, Rigos challenged Combat God. Even with the power of Nightmare he was defeated.[1]After his defeat he was sealed under a giant land mass by God of War. He was released by God of War during the Subjugation Round and was the first ever 5* monster introduced in the tournament.

At some point he gave Octonash a Devils shield.

He was constantly communicating with Octonash to see if she could handle Hardcore Leveling Warrior's Alliance but was first seen after she was killed. He appeared with Todish after Octonash was killed and ordered Todish to fight HCLW's alliance. Todish was killed and Rigos had half his hemet blown off by a suicide attack from Tempest.

Impressed, Rigos faced the rest of the party himself. He easiy blocked all the attacks that were thrown at him and defeated Tac, Lime and Pooh Upooh and Lime in a single attack. He managed to kill Sora and critically injured HCLW before killing Dark.

Before Dark was killed, he used Wind Up to revert HCLW back to his #3 Ranker state. This took Rigos by surprise as he had never seen a human this strong. HCLW was able to match Rigos blow for blow, escape from his high tier binding skill, destroy his sword and even send him through 3 mountains . Rigos was split in half by a Monnligh Slahs but used NIghtmarization. He gained the upper hand and managed to pverpower HCLW while using his Nightmare imbued attacks to destroy his Boots and slow him down.

The long drawn out battle ended when HCLW avoided a critical strike forom Rigos by luckily slipping on the ice created from Rigos' earlier attacks and cortically injuring him. He was killed when HCLW used a Lucky Punch with an attack power of 99,999.[4]

Rigos was an extremely power being and was once known as the strongest devil. After being released he couldn't be controlled by the Combat NPC who hold great power in their own right[5].

He was able to defeat a team comprised of Tac, Pooh Upooh and Lime which had an estimated combat rank of S, in a single attack[1]. Tempest's self explosion imbued with Holy power which is a devil's weakness and was capable of destroying Todish's head, only managed to crack the right side of Rigos' helmet[3]. He was able to survive a headbutt from a #3 Ranker form HCLW through 3 mountains with only the other side of his helmet being damaged.[2]

He was able to match #3 Ranker powered HCLW's blow with a blow of his own, which means his strength stat was also 900+. When equipped with his sword, he is able to freeze a large area of mountains with a single slash from his sword and his sword slashes are easily capable of destroying a city.[2]

As noted by Pooh Upooh, Rigos' possessed tremendous spell power[1] and uses very high-tier ice magic. He is capable of using high-tiered offensive magic such as Blizzard[2] and Frozen Blade[1] as well as very high-tier binding skills such as The Hands of Deceased.[2]

After using Nightmarization , Rigos already great power was boosted even further and he was able to overpower the #3 Ranker Powered HCLW.[2] He was able to easily catch a kick from HCLW with a strength stat of 900+, his ice attacks were now imbued with the power of Nightmare which nullified all defences. His ultimate attack, Ice Spears, was powerful enough to critically damage a #3 Ranker form HCLW.[4]

Rigos is able to fix a fatal heart injury by freezing it and even create a weapon from his blood. He would have defeated HCLW were it not for a lucky slip.[4]

Rigos has a very high level detection skill and he was able to see the combat abilities of players in the Subjugation Round. It is even capable of usually detecting the skills used by players.[3][2]

These are the skills used by Rigos

Rigos challenged God of War and believed he could win. Even with the power of Nightmare he was easily defeated and sealed under a Mountain-like land mass for an unknown period of time.

God of War released him for the Subjugation Round and asked him to collect the heads of decapitated human heads for collection. Rigos thought it was savage but made promise with God of War to do so.

Retrieved from "https://hardcorelevelingwarrior.fandom.com/wiki/Ligos?oldid=23512"
Community content is available under CC-BY-SA unless otherwise noted.