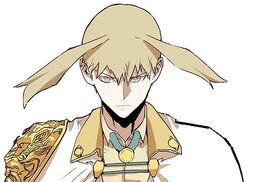 "Only those gifted with overwhelming powers are the ones still standing. Everyone else is nothing but a waste of space."

Han Gun-Soo, known as Light in Lucid Adventure, is the 2nd son and the youngest child of Giga's Chairman, Han Sung-Gong. He is the current Vice President of Giga and Lord of Totoras. Light is not officially a Ranker, but based on the power he displayed in the PvP Rounds, he was estimated to be Ranked No.3 under Giga's Ranking Systemt.[5]

He participated in the the last ever Combat Tournament in order to win 'God's Gift' and gain his fathers recognition. His team was defeated in the final by Team Dark.[6]

Due to the Divine Skill used on him by Hardcore Leveling Warrior in the PvP Round Final, Light's character had to be 'stitched back together' and he was relegated to support role by Giga while he recovered.[7][6][8] 14 years later (2 years in reality), Light has still not fully recovered from Hardcore Leveling Warrior's attack, which is limiting the number of skills he can use.[9][10]

Due to his actions and role since his introduction, he is one of the major antagonists of season 1 and season 2.

Retrieved from "https://hardcorelevelingwarrior.fandom.com/wiki/Light?oldid=32778"
Community content is available under CC-BY-SA unless otherwise noted.