Liar is the Transcendental Skill Type Personal Attribute of Constant.

Constant's personal attribute, 'Liar', awakened at the same time that the Nightmare skill was activated.[1][2] The principle on which his skill worked is simple. He says a lie and the other person believes it is the truth.[2] He whispers to 'mana' and is able to trick magic and skills. Sometimes, the target's mind and body and even Constant's own body can be deceived by the lies.[2]

The extent to which a lie can deceive is limited. It can cancel magic, it can strengthen the user and even deceive a person's mind. 'Strengthening and temporary brainwashing'. Unlike any other transcendental type, it isn't a fraudulent skill (사기스킬) that can change the rules of the world.[2]

But the scary thing about Constant is that his lies are elaborately constructed.[2] In the end, the situation created by those accumulated lies makes it impossible to know what is real or and what is false. This leads the enemy to believe that Constant is using an unbelievable skill.[2]

And the only penalty of this personal attribute is that the caster gradually becomes unable to distinguish between reality and lies.[2] Little by little, Constant was getting crazier every time he used his power.[2]

According to Han Gun-Ho, Constant can only use his ‘Lie’ skill when he's in a state of panic and can't use it without Mochi's stabilizer skill.[3]

Divine Physical Enhancement: Constant is able to lie to himself and enhance his physical abilities to a divine level. With this, although he was not as fast as the Creator God Han Gun-Jae, he was able to somewhat keep up with the the depowered-God.[4]

Speed Enhancement: Using his lies. Constant can enhance his speed so that he can reach incredible velocities instantaneously, even reaching levels of speed that are usually beyond his normal limit.

Mental manipulation: Constant can control the minds of others with targets being completely subject to his mental control. If the victims were placed into a semi-conscious state, they may not have any recollection of the previous actions that they performed while under its effect. His mental manipulation is even dangerous to the gods as even Han Gun-Jae, The Absolute God of Lucid Adventure. Han Gun-Jae could see that it was dangerous due to the addition of Nightmare.

Magic Negation: By whispering to mana, Constant is able to completely negate magical attacks and skills.[5]

This is the history behind Constant unlocking the skill

Even at Level 40, Constant had still not unlocked his Personal Attribute which worried him.[6]

It was finally released during the Zara Guild's infiltration of Cobalt Castle. Constant feeling that he would be blaed for Armes capture relaesed his Deceiver while he was under the Nightmare status and his eyes glowed a purple colour and he was able to use Hypocrite's Lie, which is an area skill that makes people within the area believe his lies without question or suspicion.[1]

During his visit of Cobalt Castle, he was able to make Sad Smile's staff turn against him and attack him, which most likely has something to do with him his personal attribute. Their eyes where glowing indicating a form of mind control[7]

Mental Manipulation: Constant is able to manipulate the minds of others and his own through lies. He is also been shown to be able to control others as well.

Speed Enhancement: Constant is able to greatly increase his speed using Lies that Deceive the Body. 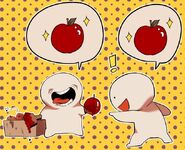 Constant says a lie and the other person believes it

Constant whispering to mana to deceive it