Lend is a Gambler Class Skill. It is the reverse of Borrow.

The Gambler is able to lend their stats to another player. It seems like the gambler has to be in the same party as the player they are lending their stats to.[1]

It is the reverse skill of Borrow.[1]

Hungry Ghost lent his stats to Femme after he was critically wounded by Light's Blade Whirlwind. Femme's stats increased significantly allowing her to transform into the original form of a Vampire.[1]

Hardcore Leveling Warrior lent his 'Luck' stat to Dark which increased his chances in the Godcha draw from 0.1% to 0.2%.[2]

Demon Lending his stats to the Vampire Girl (Episode 112) 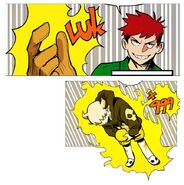