Lakiren Castle is the 1st castle of New Nightmare and the former 59th castle of the Giga Empire. It is ruled by the New Nightmare Queen, No Name. Lakiren was originally guarded by the best players Giga had to offer.

Lakiren was originally guarded by the best players Giga had to offer.

Lakiren was invaded by Nightmare Soldiers who defended the castle. They killed the sorcerers and were close to breaching area A-4 of the castle gate.[3]

The Nightmare Soldiers are burnt by an attack by General Manager Park, who appears with Secretary Park and Assistant Manager Kim. They proceed to launch a counter attack against the Nightmares and manage to defeat them.[3] 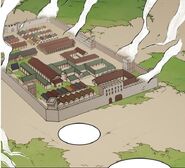 Retrieved from "https://hardcorelevelingwarrior.fandom.com/wiki/Lakiren_Castle?oldid=20916"
Community content is available under CC-BY-SA unless otherwise noted.