"Lacerate" redirects here. For other uses of this name, see Lacerate (Disambiguation).

“The last is a super deadly - collaboration of my cuties-!!! And- I'll end you with a really dope and cool skill-!!!”
― Hardcore Leveling Warrior[source]

Lacerate (節),[2][3] also known as Perfect Lacerate,[1] is a divine skill in Lucid Adventure. It was created by the Absolute God of Lucid Adventure, Han Gun-Jae. It is the true and complete form of Moonlight Flash.[2]

Stat Requirement: The player requires a very high intelligence stat to use this skill.[4]

The user performs a slash that completely cuts off the form of the target's existence from its concept.[1]

It is the the true and complete form of the Moonlight Slash skill. To perform Lacerate with a sword, the user gets into a stance, their hair and clothing start to rise like the wind is blowing them upwards, and then the user lunges forward slashing the target. Unlike its imitation, Moonlight Slash, Lacerate(節) cleanly cuts through the target and prevents them from regenerating.[2]

The difficult Input Command and the high Intelligence stat requirement make this skill extremely difficult to use. Novelist Han was able to use this skill because he is one of the forms of Han Gun-Jae, The Creator of Lucid Adventure.[5] Hardcore Leveling Warrior was only able to use this skill whilst he had equipped the partially recovered Memory of Cintamani as well as investing all his remaining Lucky Coin buffs into the Intelligence stat during his duel with No Name and after returning back to his Rank No.1 form, which made him and All-Stat and equipped him with the Golden Armour Set.[6][7][3]

The Best Swordsman is still unable to use the complete version even after using his 100% True Awakening which increased his power and buffed his intelligence stats to an extreme level.[8]

As a divine skill, the destructive capability of the skill is extremely high and it may be the strongest skill in the game.

When Lacerate(節) was used by Novelist Han, the skill had enough force to split the clouds in the sky, destroy the twisted rocks in the skills pathway and negate a Lucky Coin-buffed undead Monster's instant regeneration.[2]

The Memory of Cintamani and The Treasured Sword of the Knights shattered after Hardcore Leveling Warrior used used Lacerate(節) on No Name.[7]

Equipping both The Treasured Sword of the Knights - The 7 Truths and +16 Treasured Sword of the Brave, The Rank No.1 Hardcore Leveling Warrior executed Lacerate(節) on the Nightmare Light. The attack power of the skill so high, that is was strong enough to destroy both Nightmare Light and completely overwhelm his Black Nightmare Dragon attacks, a skill that was able to destroy God's Arena which should not have been possible for a mortal according to God of Combat.[3][9] The force of the skill was so powerful that despite Hardcore Leveling Warrior being several miles above the Tomb of Swords, the skill's after effects was able to illuminate the whole Tomb of Swords.[9] Light's body had to be stitched back together and treated weekly and 14 years later (Lucid Adventure time), Light's body still has not fully recovered from the effects of Hardcore Leveling Warrior's Lacerate(節).[10][11] Both of Hardcore Leveling Warrior's swords shattered immediately after using the skill.[9]

Just like the weaker version of this skill, Lacerate (切), Lacerate (節) can be used without swords as shown when Sword Master used it to defeat Zero and the Giga Foot Soldier.[12][13] 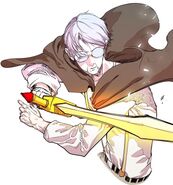 Novelist Han preparing to use Lacerate(節) 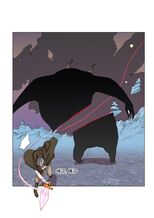 Hardcore Leveling Warior preparing to use Lacerate(節) against No Name

No Name killed by Lacerate(節)

Nightmare Light and his Nightmare attack split by Lacerate(節) 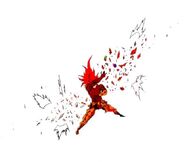 There are two versions of Lacerate in the series, The true form: 'Lacerate(節)' (Korean: 절(節)) and the incomplete form 'Lacerate(切)' (Korean: 절(切)). '節' literally translates to 'incision'; 'section'. '切' literally can mean 'to cut; to slice; to carve; to mince' with a knife; it can also be translated to 'to cut off'; 'to disconnect'.

The complete version were correctly written as 'Lacerate(節)' by LINE Webtoon in Episode 63 and Episode 167.

In the LINE Webtoon translation, Lacerate(切) is not written and only appears as 'Lacerate' in Episode 86, Episode 92 and Season 2 Episode 14. This led to the English readers to not even be aware of the difference between the complete and incomplete versions. As of yet, there has not been an explanation by LINE Webtoon for the omission of the '切' hanja.

In Season 2 Episode 54, The Best Swordsman used the Lacerate(切) with his Last Turtle Ship, The Last Skill - Artillery Fire of Victory x Lacerate (切). The (切) was included but the Lacerate was incorrectly translated as Slash by LINE Webtoon.

Novelist Han's Lacerate (節) in the Korean and English versions. 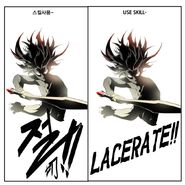 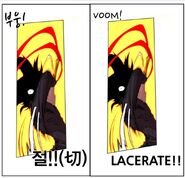 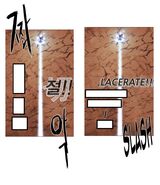 As noted above, there are two distinct Lacerates, Lacerate(節) used by Novelist Han in Episode 63 and Lacerate(切) first used by Hardcore Leveling Warrior in Episode 86. The author has never explicitly stated the differences between the skills.

This wiki has gone with the former theory and we assume there are only two version of Lacerate. With the exception of Han Gun-Jae, we will be operating under the assumption that when the author does not put any hanja it is the incomplete version, Lacerate(切), being used. As more information is revealed this will be changed.