Kusham is an enormous humanoid brown cat that wears a large sweater that covered his entire upper body and head except for his face. Large black jacket with pink fur collar, golden chain with fish around his neck, black pants and shoes. 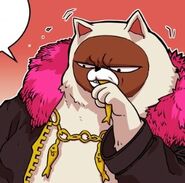 Kusham is a businesslike person as shown and doesn't like getting distracted or when things sidetrack as he immediately rushed to the deal after Sad Smile pulled a prank on them through a zombie ambush. He is a superstitious cat as he got scared and warned Sad Smile about the curse of the Archfiend.

Kusham's younger sister. He uses Holla's ability to detect personal attributes in his business and lets her freely lounge around their home until her expertise is needed.

Kusham and Heart Heater used to have a partnership in the black market until Heart Heater left Yopi Land and retired from the business. Though they haven't seen each other ever since then, they are still on good terms and friends. Kusham is now able to communicate with Heart Heater now that the truce between the four major guilds have been made.

They are good old friends and associates. Kusham was glad to finally see Rim after the truce and now does business with him along with Heart Heater.

Kusham helped Sora in the past by letting her wear all the armors he has on disposal until she decides to buy although he did commented that it'll take a long time as Sora will wear every armor.