“Small fries like you think you can deal with me? I can handle you all barehanded!”
― Kkakdugi[source]

Realising that he would be apprehended by Giga for his use of Nightmare, Kkakdugi attempted to flee but he was eventually arrested by the Giga Guild Security Team and was scheduled to be deleted from the game.[1] His fate is unknown. 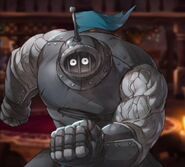 As a ranker, Kkakdugi was extremely confident in his abilities, especially when it came to fighting hand-to hand. He had ambitions to conquer Lucid Adventure as he led his guild in the Absolute Quest.[1] He was willing to do anything to win as he used a Nightmare bug in an attempt to defeat Hardcore Leveling Warrior, knowing full well that its use would lead to him being apprehended by Giga.[1]

The exact relationship between Kkakdugi and his guild members was never revealed but he must have at least had a cordial relationship with them seeing as he was leading them ton conquer the game via the Absolute Quest.[1]

Kkakdugi was surprised that Armes could see his personal attribute and his nature. He gave Armes the page form his 'book' after he was defeated by Hardcore Leveling Warrior and The Best Swordsman.[1]

Kkakdugi was wary of Giga. He was wise enough to flee when he used the Nightmare bug because he knew Giga Guild Security Team would come after him. He was eventually captured and by Giga and taken away by Han Gun-Ho.[1]

Kkakdugi was the Guild Master of the Tete Guild, directly controlling the guilds activities.[1] In the early days of Lucid Adventure, Kkakdugi was a powerful player and was even a ranker.[1] He easily defeated multiple normal members of the Zara Guild. He was eventually defeated by Hardcore Leveling Warrior who was ranked at least No.88 in the Giga Ranking System.[1]

Kkakdugi wraps his body with a giant stone golem armour. He becomes stronger and more durable after using this skill.[1] He built his castle on top of the rocky area in order to absorb the ores to enhance himself even further.[1]

Armour Empowerment: Kkakdugi becomes stronger and more durable when his body is in the Stone Golem Armour.

Nightmare is a bug that changes the user's skills, personality and everything else. The user can get much stronger in a short period of time. It grants the user the ability to use Nightmare which significantly increases the players stats such as strength, speed, regeneration and defence as well as imbuing all their skills with the power of Nightmare, which nullifies all defences.[1]

Kkakdugi resorted to using Nightmare after he was defeated in a fist fight by Hardcore Leveling Warrior. Unfortunately for him, he was cut apart by The Best Swordsman's Fragmentation before he could strike down Hardcore Leveling Warrior from behind. He was eventually captured by Giga's Security team and purified of the Nightmare bug by Giga's Ancient Relic Immobilization Equipment.[1]

Kkakdugi fought with his body wrapped around his Stone Golem armour and appears to favour fighting barehanded.[1]

The characters name, '깍두기', is translated as 'Radish Kimchi' by LINE Webtoon. '깍두기' is pronounced 'Kkakdugi' in Korean and literally translates to 'diced radish kimchi'.