Kim Sehoon (born March 9), also known as Hohoee, is a South Korean manhwa and webtoon artist. He is the creator, writer and illustrator of the Hardcore Leveling Warrior webtoon. He produces the webtoon through his production company, Studio Hohoee.

Kim Sehoon has stated that he came up with the basic idea of Hardcore Leveling Warrior whilst he was studying at University. He was also inspired by several MMORPG series including Vindictus, Mabinogi and Ragnarok Online.[1]

He wanted to create a world of escapism, where people could escape their dark realities in the real world through the game world such as Hardcore Leveling Warrior. He incorporated a lot of his personal experiences into the series.[1]

In 2013 or 2014, Kim Sehoon already had a picture of Lucid Adventure on his blog, but he scratched it. He already had a picture of Hardcore Leveling Warrior, although the overall characters design changed by the time the series came about. The idea of logging into Lucid Adventure and the House of Beginnings was already formulated in 2013 and Kim Sehoon even posted a thread about it on dcinside.com.

In a 2017 interview, Kim Sehoon has stated that he has not thought of any future projects at this moment due to being preoccupied with The Hardcore Leveling Warrrior series. He did state that he does think about Heart Heater's back story.[1]

In a blog post in November 2020, Kim Sehoon said that little by little he is preparing a few pieces of work other than Hardcore Leveling Warrior. He said that one of them is about the Knights. The other story is about Heart Heater with the title maybe being "Heart Heater". He also said that it is difficult to write and illustrate alone and perhaps he would need a different artist to do both projects.[2] This is based on the experience he had serialising two webtoons at the same time when he worked on Mabinogi Heroes: For the First Time in my Life in 2017 alongside Hardcore Leveling Warrior.[1]

Kim Sehoon's pen name he uses is Hohoee (호호이). His pen name is used as a basis for the names of several things

Kim Sehoon's character avatar is a pink-coloured figure with a spherical-shaped head, 2 large white eyes, limbs with no fingers or thumbs and a large thumb like protrusion on top of it's head. His avatar sometimes wears a green frog costume. 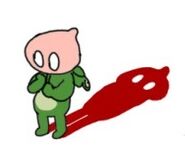 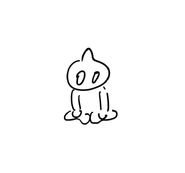 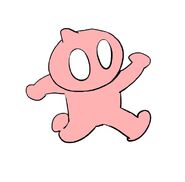 Kim Sehoon's character in Gong Won-Ho's Room (Mabinogi Heroes: For the First Time in My Life) 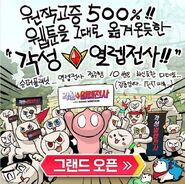 Kim Sehoon in Let's Overcome this Together 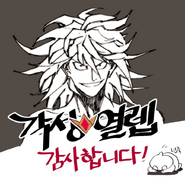 Kim Sehoon thanking Superplanet for the gift they gave him

There are several instances where motifs of Sehoon Kim have appeared in Lucid Adventure as easter eggs.

Kim Sehoon on one of the wanted posters in Quest House

Kim Sehoon's character in the pommel of the Random Sword

The Hohoee 25 name and store symbol 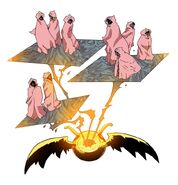 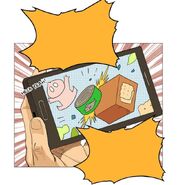 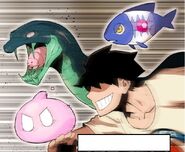 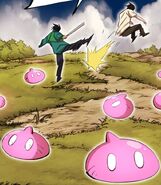 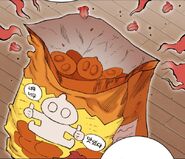 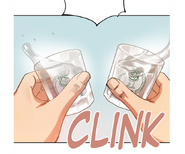 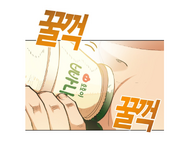 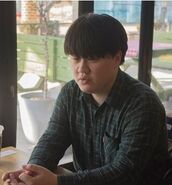 Kim Sehoon during an interview in 2017 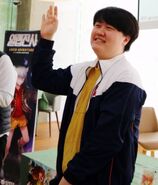 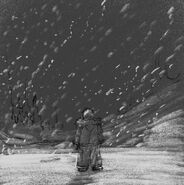 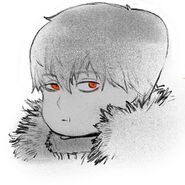 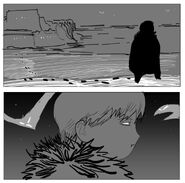 Grass Roots Guild sketch on a Twitch stream in January 2020 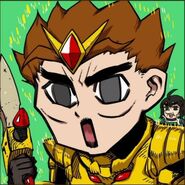 Relationships with other Webtoon Creators

On April 28, 2019, Superplanet, a mobile game developer, invited 80 fans of Naver Webtoon's "Hardcore Leveling Warrior" and held a fan meeting with artist Kim Sehoon. At the fan meeting on this day, Kim Sehoon directly prepared a gift for Super Planet, which was in the process of developing the 'Hardcore Leveling Warrior with NAVER WEBTOON' based on the webtoon of the same name as the fans, and received a tremendous applause response.[17]

On 22.01.21, the GM of the game wrote a letter to the writer to convey the feelings of the develepoment team and the operations team to Kim Sehoon. The letter can be seen here.

On 06.03.21, the writer posted a message on the game's naver cafe, thanking the team for the gift he received. He also drew an image thanking them.