Juto Gurland, simply known as Gurland, is one of the Ten Demon Nobles of the Demon World and a member of New Nightmare.

Under the orders of his Queen, Gurland led a Nightmare attack on Dark Land but was stopped by Dark. He managed to take over Chota's body temporarily before he was eventually defeated by the returning Sora. He is currently trapped in Heart Heater's Anti-Nightmare Quarantine Device. 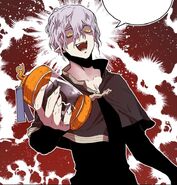 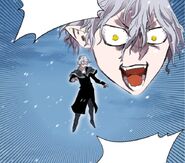 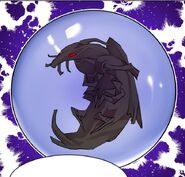 As a Demon Noble, Gurland is extremely confident and his power. Like a lot of demons in the series, Gurland looks down on humans. He believes they are weak and stupid. Even after the warning No Name gave him, his superiority complex against humans caused him to take Dark lightly which eventually led to his first defeat.[1] It appeared that Gurland was at least humble enough to realise his own short comings as he didn't want to face Dark and instead targeted Chota's body.

After taking over Chota's body, Gurland's arrogance immediately returned and was stronger than ever. He was enraged that Dark beleived he could capture him and tauunted Dark, saying that he will only drive a nil in his own coffin.

After absorbing Chota's Karma, Gurland's power increase made him as arrogant as ever and he even believed he could defeat Sora. After his defeat, the arrogant Gurland could not believe he lost.

Gurland is aware of Le. Lazie. It is unknown what kind of relationship they have. He thought Dark was an imposter of Le. Lazie and believed his Bear Hunt was a sloppy imitation of Lazie's. this would suggest that he thinks Le. lazie is quite powerful.[1]

No Name is Gurland's queen. She sent Gurland to conquer Dark Land and warned him to be wary of his power. Gurland did not heed her warning which contributed to his eventual defeat.[1]

Despite the warnings by No Name, Gurland did not take Dark seriously, and looked down on him for being human. He taunted Dark, calling him a Le. Lazie impostor and believed he could defeat him easily. After his defeat at the hands of Dark, he finally realised the error of his way. After taking over Chota's body, Gurland believed he could defeat Dark but quickly realised that he needed to destroy the Castle.[2]

Gurland thought Chota was a doofus and took over his body after he was defeated by Dark. He interacted with Chota's karma and was able to mimic the mana and power of Hardcore Leveling Warrior when he was rank 1. he was surprised that Chota had the strongest human piece that even demons speak about.[1]

Gurland looked down on Sora because she was human. He was surprised that she was able to kill his Nightmare Servants.[2] Sora's power forced him to use become a full Nightmare but he was still easily defeated.[3]

As one of the 10 Demon Nobles and a member of New Nightmare, it is safe to assume Gurland is powerful. After joining New Nightmare and becoming a Nightmare, his power only grew.

Regeneration: As a demon, Gurland most likely has great regenerative ability. It is further supplemented by his use of Nightmare. His head instantly regenerated after being blown off by Dark's Bear Hunt. He survived being blown apart by Dark due to his Nightmare power, although he could not move.[1] He also survived being split in half by Sora, although he remained as a fragment.[4]

Demonic Skills: As a Demon, Gurland is able to use Demonic skills. His demonic skills are further amplified by Nightmare. Parasitic Ability: Gurland had the ability to takeover a targets body.

Nightmare Tendrils: Even after his body was destroyed, Gurland was able to use some sort of tendrils to stab Chota and take over his body.[1]

Gurland uses the full power of Nightmare and nightmarisies. His power increases by several fold to the point were his attacks can seemingly overwhelm Dandelion, the summon of the Rank 3 player, Dark.[1]

Gurland flips multiple Lucky Coins and transforms into a complete Nightmare. In this form all his abilities are extremely amplified.

Gulrand relies on his soldiers to fight his battles for him until the opponent proves himself powerful in which case he personally handles it himself even turning into a Nightmare.

With his parasitic ability, Gurland would possess and take over the opponent's body and use their power for his own.

At some point, Gurland became one of the ten demon nobles and allied with New Nightmare.

Gurland appears in front of Dark Land alongside with his Nightmare soldiers, preparing to attack it. He then attempts a sneak attack on Dark's group but they dodge it, but drop the Nightmare Core. Gurland picks it up, telling them they shouldn't "throw away something important".[5]

Gurland's Head is blown off by Dark's Bear Hunt which causes him to drop the Nightmare Core. His head instantly regenerate and he mocks Dark for being a Le. Lazie impostor. He orders his Nightmare soldiers to attack Dark's group but they are easily defeated by Dark's Bear Hunt and his summon, Dandelion. Gurland seeing Dark's power uses his full Nightmare power and blasts away Dandelion. Whilst rejoicing in his supposed victory, he is destroyed by Dark's Nightmare Heart Detonation. Gurland survives as a tiny fragment thanks to his Nightmare power and proceeds to devour Chota, Nightmarising him in the process and taking the form of Hardcore Leveling Warrior.[1]

Gurland uses Moonlight Slash on Dark, who avoids it after activating the Eye of Trajectory. Gurland is trapped in a Bone Prison but Guurland easily breaks out of it. Gurland uses Nightmare to infect the wildlife around Dark Land to create an army. As he orders them to attack Darn Land and destroy the castle, they are all killed by the returning Sora's Sora Slash.[2]

Gurland tries attacking with eh Moonlight Slash but she dodges it and he is then pushed into the ground by her Meal Fork - Stab. He fires a Hell Fire at Sora but she blocks it and hits him with a Spoon Killer which critically injures him. Gurland then uses Nightmarization 100% and becomes a full Nightmare. He then uses Nightmare Skill - Moonlight Slash but Sora neutralises it and cuts him in half with her sword.[3]

Chota is then freed from Gurland, whose remnants are contained by Heart Heater's device.[4]