Imoogi are powerful large reptilian like creatures in the world of Lucid Adventure.

They are reptile like in appearance and covered in dark purpilish scales with a blueish underbelly. They have bluish eyes.

A python about to engage Hardcore Leveling Warrior 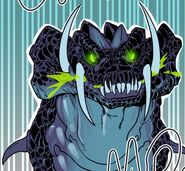 A Python released by Giga's Mercenaries near Castle Nario

Imoogi's are powerful creatures that are known for the durability and regeneration and feared for their deadly venom.

Immense Durability: The Scales of Imoogis are tough enough to resist the attack of Swordsman such as Drip Soup with no sign of damage.[1]

Immense Regeneration: According to The Hardcore Leveling Warrior, Imoogis have an extremely high recovery stat and heal like crazy.[2]

Venom Secretion: Imoogis possess a yellowish/green venom that is strong enough to kill any person that comes into contact with it.

Imoogis usually try to get close enough to their opponents in order to swallow them an expose them to it's poisonous venom.

According to Wheat Field View, they are difficult to trap.[3]

1 of 3
Add photo
An Imoogi draws a summoning field around itself and when it dies it is reborn as a zombie dragon, increasing it's

strength.[1][3] Not all Imoogis have the skills to transform into Zombie Dragons.[3]

Enhanced Strength: The Zombie Dragon's power is greater than an Imoogi's. The exact strength increase has not been revealed.

Increased Size: The Zombie Dragon is several times bigger than an Imoogi.

At the start of the series, Hardcore Leveling Warrior was sent on a quest to eliminate a Imoogi that was blocking the Cobalt Castle Trade Route and preventing it from trading with others.The Imoogi was quickly dispatched by Hardcore Leveling warriors might and was then resurrected in the form of a Zombie Dragon. Eventually, it managed to kill the #1 Ranker after interference from Zero. Siege Round Preparation

Retrieved from "https://hardcorelevelingwarrior.fandom.com/wiki/Imoogi?oldid=27753"
Community content is available under CC-BY-SA unless otherwise noted.