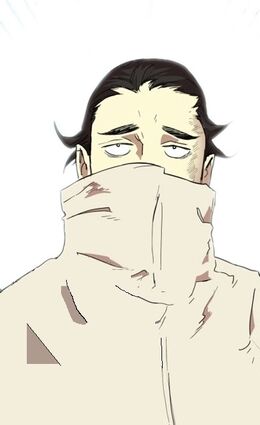 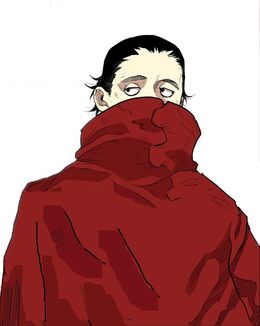 Episode 110
Hungry Ghost is a player in Lucid Adventure. He joined Giga in order to defeat Hardcore Leveling Warrior in the last ever Combat Tournament.

He took part in the Combat Tournament as a member of Team Light. His team reached the final of the tournament but was ultimately defeated by Team Dark.

Hungry Ghost is a tall person with black slicked back hair and wears knee-length red coat and red pants. His attire remains the same in the PVP Round but has an overall beige theme. 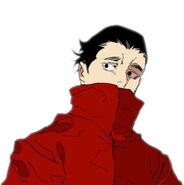 Hungry Ghost is a sneaky fighter as he was able to trick and nullify the Grass Root's strategies without being seen using a spell. He also doesn't like being compared as he was mad when people kept saying Hardcore Leveling Warrior is the best gambler in the world.

“All I Want is to beat that bastard in the tournament...”
― Hungry Ghost

Hungry Ghost joined Giga so he could get a chance to defeat a person in the PvP Round.[1] It turns out that the person was Hardcore Leveling Warrior.[2]

He found his lucky coin useful and used it very often especially when he activates his Majin Form.

Gambler: As a gambler, Hungry Ghost is able to use skills associated with the Gambler class. Hungry Ghost is a Gambler and is capable of Borrowing the skills of players he killed as well as Lending his stats to his allies. He is also able to use a Lucky Punch which deals random damage according to numbers in a slots machine.

Like all Gambler's he is able to summon a Ruler to ensure that any 'Bets' made are followed.His intelligence as well as his ability to come up with strategy ensures he is able to maximise the potential of the Gambler class, similar to Hardcore Leveling Warrior. Unlike Hardcore Leveling Warrior, Hungry Ghost is more risk-averse and this is reflected in his Gambler Skill Tree.

Tactical Skills: Perhaps Hungry Ghost's most frightening aspect is his intelligence. Hungry Ghost is an intelligent fighter who does not rush head first into a battle. He is a calculating fighter that tends to think three moves ahead as Light noted.[1] He was able to deduce that the Swordsman he saw earlier in a gambling hall was being controlled because of his use of Soul Whisper and managed to attack him whilst his guard was lowered, minimising the risk of a prolonged fight attack whilst increasing his chances of being recruited by Giga.

He was able to convince 3 other difficult characters to temporarily form an alliance. He seems have knowledge about the different classes as he recognised Soul Whisper used by Pooh Upooh and also had the knowledge, albeit outdated information on the cool down time of a Master Wizard's major skill usage.Even when his strategies goes wrong, he is able to quickly change the plan as he did when he was defeated by Light but still bought enough time for Light to be trapped in a a No-Mana Zone.

Hungry Ghost is a very capable fighter as shown during the Giga Interviewees fight against the Master Wizard Light. He is a very calculating fighter and tends to try and minimise risk whilst looking for the best solution to maximise the desired outcome.

He easily destroyed the Parasitic Jellyfish that are invisible to the average person.

So far, he tends to use mostly borrowed skills from other players but seems adept at using Combat Skills as he was seen attempting to use a Lucky Punch on Light.

Before the special interview by Light, Hungry Ghost was hiding away in Lucid Adventure and gambling away his mortgage since The Real World law cannot monitor the in-game gambling.[1]

As Giga announced the special interview, Hungry Ghost was one of the participating members. Timmy who was charging in to cut Light, was intercepted by Hungry Ghost who stated that he will "cut of the vice president's head first" and also intended to take down femne but was too slow to reach her. Hungry ghost at the same time stopped Red-Haired Wizard's parasitic jellyfish from controlling him. Through Pooh Upooh's puppet activated soul whisper to scretly communicate with Timmy, Femne and Hungry Ghost, intending to team up to defeat Light, however Hungry Ghost killed the puppet due to the suspicion of a swordsman using a black magic skill.

After which he temporarily borrowed the soul whisper skill, stating again that they should team up. On the condition that they indeed win, he'll share the prize money from the tournament, and further using his ruler to inflict damage to his head that also transfers to the real world, in the case he betrays them. Successfully, they gained a temporary truce and began to work with each other, with their efforts they created a one second delay, giving the Hungry Ghost the opportunity to use Lucky Punch against Light who he assumed was on cooldown. Ultimately underestimating him as he assumed he still had the same stats a year ago, and dieing to Light's blade whirlwind skill. In his final moments, he lent Femne his stats, alongside with the no-mana zone constructed which in the end, still failed to beat him.

Shortly after they followed Light into Giga's base, though Hungry Ghost was still concerned over them not defeating him and therefore should of not passed, however in Light's perspective they were deemed good enough and passed the interview. In actuality there was still a final test, that they would faced a team's group members to then become their replacement and participate in the tournament.

The character's name,'아귀', literally means 'Hungry Ghost'. It is incorrectly translated as 'Demon' as LINE Webtoon.

'아귀' is the Korean form of the hanja '餓鬼' which means Hungry Ghost. '餓鬼' is the Chinese and Vietnamese translation of the term preta in Buddhism.