Hidden Gate also known as Black Skill Window (검은 스킬창, Geom-eun Seukilchang), is is a dark version of a players skills window. It is a considered a bug in Lucid Adventure.

The use of a Dark Gate gets a player immediately punished once they use it. Hardcore Leveling Warrior was chased by the Guard NPC[1] and Giga Guild Security Team[2] after he used it in Leaf Dungeon.[1]

If a player uses the skill during a quest and they are caught by the guards, the quest becomes invalidated so it is best to leave the party and escape.[1]

It seems Giga players can use it without any penalties as Light was seen using it during the Preliminary Round.[3][4]

The conditions for acquiring a Black skill window has not been revealed.

As he was about to be killed by the Red Player, Hardcore Leveling Warrior opened the Hidden Gate and used his Lucky Coin, granting him Strength and Regeneration x77.[1]

The Combat Tournament - Preliminary Round

As he was about to be attacked by Sora and Dark, Light opended his Hidden Gate and used Dark Light.[4] 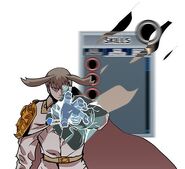