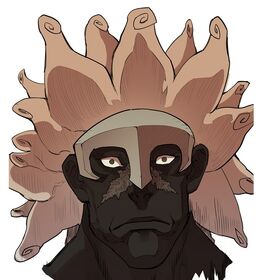 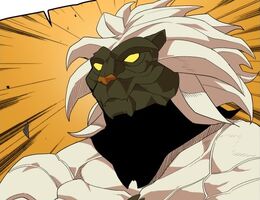 Inactive (Deleted by No Name)

Episode 70
Heriach (Hercules) was a player in Lucid Adventure. He was a member of the Giga Empire and was part of Han Soo-Ah's Mythical Team. He was ranked no.40 in 'Giga's Ranking System' and was one of the top rankers under the 'Lucid Ball Ranking System'. Due to his fame, his fighting style, his personal attribute and his weakness were all over the internet.[1]

After the two year time skip, under the orders of Han Soo-Ah, Heriach and Apple went to the Tower of Abstinence to retrieve one of the Divine Items of the Absolute Quest. He challenged Dark to a ranked match but was defeated.

During Giga's last stand, Heriach was one of the Giga players that engaged Queen No Name. He was eventually defeated and deleted from the game by No Name, losing his memories of Lucid Adventure in the process.[2]

Heriach is a tall and muscular dark-skinned guy with white hair. He has a white lion-shaped armour strapped around his body to his left shoulder and a waist cloth.[1] 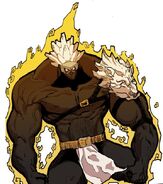 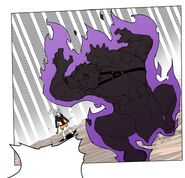 Heriach Clone infuriated by Dark's Flare of the Curse.

Heriach prepares himself for combat.

Just like his namesake, Heriach is extremely confident in his abilities, particularly in his God's Body. He is willing to let his opponents attack him first before retaliating to show off his own power.[1]

He is seeks challenges for fun and is disappointed when he feels his opponent is weak.[3]

He gets very angry if a person tries to exploit his supposed weakness to flame magic and goes into a berserk rage.[1]

Heriach does not believe in rank battles and would much rather take a rank as soon as the opportunity presents itself. As a ranker, he had all the privileges that can come from it like wealth, accomplishments, and fame but this aspect couldn't satisfy him. His desire is to continue climbing and become stronger. He can never be satisfied as he is the ambitious type of player. He is like the Hardcore leveling warrior in the sense that he believes that there is the strength he can gain

Han Soo-Ah is Heriach's leader. As such, he respects and follows her orders as her subordinate. He refers to her as "Ms. Han".

Heriach and Apple are partners that Han Soo-Ah dispatched to retrieve the divine item. Heriach respects and follows Apple as the leader of their mission, not being bothered when Apple told him to shut up. They are fellow comrades under Giga's Mythical Team.

As his superior, Heriach shows respect to Light. He recognizes Light as the Vice President. When Light told him them to get out, Heriach knew that Light wasn't being completely honest to them and figured out that he wanted them to deal with Team Dark.

As one of the Top Rankers, Hercules is one of the strongest players in the Game. Heriach has a reputation for destroying field bosses like they are nothing and this is known all over the net.[1]

His 15% clone had an overwhelming aura and it's mere presence of was overbearing. The clone was able to overwhelm a Level 73 Sora and Level 58 Dark.[1]

Unfortunately, his weakness to the fire attribute is well known on the internet meaning that his opponents will try and take advantage of it during fights.[1] He is one of the few characters that have awakened their personal attributes.

His presence alone was enough to put Dark's whole party on alert.[4]

During the rank battle vs Dark, Heriach's power was over 1.5x more than the current Rank 3 Players.

A blow from Heriach sent Dark flying in the air and a double axe handle from Heriach had enough force to make Dark crack the ground on impact.

Enhanced Durability: Heriach caught a punch from the rank 3 Dark easily without suffering any damage.[4]

Overwhelming Aura: Using the Maximum Survival Instinct, Dark was able to see 15% Clone Heriah's yellow Aura, which he described as overwhelming.[3] When the real Heriach got serious, his mere presence was enough to make Chota shiver in fear.[5]

Hercules: Heriach can use skills associated with the Roman and Greek demi-God, Hercules. He is granted extraordinary attack power and various invulnerability passive skills but shares Hercules' weakness to fire attributes.

Weapon Immunity: Heriach's God's Body grants him immunity against all weapon attacks. His 15% clone was completely unharmed by a sword attack from a level 73 Sora wielding both an Ego Sword and Japanese Sword of Alloy.[1]

Heriach was able to quickly heal from the fatal wounds he received from Demonic Dark's Bear Hunt.[6]

12 Labors of Hercules: Heriach's True Awakening of his personal attribute based on the 12 Labors of Heracles (Greek: Hercules). Heriach's face changes to that of a lion with a large white mane and he is surrounded by an orange lightning like aura. In this form, his Combat Power exceeds 50000 and his damage output is ranked among the Top 1%, which is among the likes of Stone and Hardcore Leveling Warrior.[7][2]

Enhanced Attack Power: Heriach's great strength is amplified even more in this form, boasting a Combat Power that is over 50000. According to Dark, his punches deal AOE damage.[7] Heriach's physical damage is ranked among the Top 1%, which is among the likes of Stone and Hardcore Leveling Warrior.

Heriach was able to rip apart the high tier restraining magic, The Hands of the Deceased, with his bare hands,[8] a feat that not even Hardcore Leveling Warrior could accomplish when he was the 3rd Ranked player by Giga scouts.[9]

Enhanced Speed and Agility: Heriach's speed in further amplified in this form and is faster than even Demonic Dark. Heriach's attacks were so fast that he could immediately attack during 0.5 seconds and even with The Eye of Trajectory, Dark could not dodge them and could only protect himself using a Barrier.[7] It was noted by Dark that Heriach had 'crazy' reaction speed meaning that his reaction was incredibly fast.

Link Skill and Conceptual Magic: According to Dark, Heriach's every blow is a complicated link skill with conceptual magic. According to Heriach, he has the power of myths. In fact, he has the entire myths of the 12 labors as skill, so as such he has enough strength to even destroy Demonic Dark's Demonic Barrier

Mythical Skill Usage: According to Secretary Kim, Heriach learnt myths as his skill set.[7] Heriach is able to use Mythical skills in this form based on the 12 Labors of Hercules. Each of the Myth skills are powerful and aid Heriach in accomplishing his goal of defeating his opponent.

Heriach does not use a weapon but has a God's body and destroys field bosses like it's nothing.[1] According to Dark, Heriach is a bit of a jack of all trade and is quite well rounded.[8]

Despite being a melee fighter, Heriach is capable of fighting at all ranges. When he opens his True Personal Attribute. He is able to use his mythic skills that can cause great destruction and aid him in getting close enough to his target in order to inflict the killer blow.

His 15% clone used a bot of strategy and was smart enough to focus on Dark and ignore Sora as his skills posed more of a danger to him than Sora, whose weapon based attacks were nullified by his body.

At some point in the past, Heriach rose to become the number 40 ranked player.

A 15% clone of Heriach was created by an unknown persons and acquired by Heart Heater.[10] It was used by Hardcore Leveling Warrior to help Dark and Sora prepare for the upcoming Siege Round.[3][1]

Dark's team walks in and are put on alert by Heriach's presence. Dark immediately launches a blow which Heriach catches with ease. Heriach is then surrounded by Sora and Lu Bu. Heriach then goes on to say how he cannot fight them there, before Apple explains the dungeons situation to them. The third and final team, Light's team, shows up at the middle floor. Heriach respectfully greet Light and informs him that he did not know that he would come personally. Light scoffs at his explanation before Light and Dark get into an argument.[11]

The Dungeon Keeper keeper is summoned once the conditions of the three teams has been met. The Dungeon Keeper proceeds to explain the rules of the dungeon and opens three separate doorways for each team to go through. Heriach and Apple go through the red colored doorway first.[11]