"If you clear the quest, you will get everything" 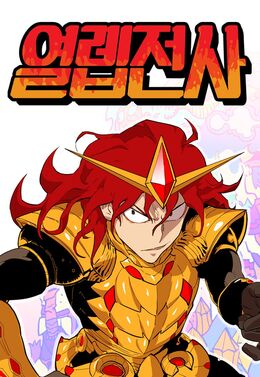 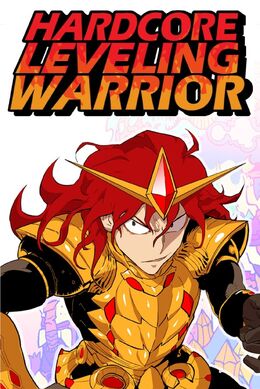 This webtoon was first published on January 24, 2016, through NAVER Webtoon (NAVER 만화) in author's native language - Korean. It is updated every Sunday.

Since the 7th of November, 2017 it has been translated and published in English on the Line Webtoon platform. It was originally updated every Tuesday and Friday but since the 26th of July 2019, it has be updated every Friday since catching up with the Korean translations.

"When you go from level 99 to level 1 and start all over again."

Hardcore Leveling Warrior was the No.1 Ranked player in Lucid Adventure and the only player on the server with The Golden Armor and max stats. He is a dirty player and is criticised for his antics such as stealing quests, blocking other users from completing quests and stealing MOBs that others had almost finished and is dirty.

During an SS-Class Quest, he is beaten by a mysterious assassin and his Golden Armor and items are stolen from him before his level and stats are Level 1. He must go on a long journey of redemption to recover his stats and power as well as earn enough money to repay the money he owes to loan sharks in The Real World.

Hardcore Leveling Warrior was the No.1 Ranked player in the Lucid Adventure. He is the only player that has the Legendary Golden Armour and max stats in every category. Due to his dirty nature, he slighted many players and made a lot of enemies. On one of his quests, he is ambushed by many players but quickly defeats them. In the midst of all the chaos he is attacked by a mysterious assassin who strips him off his Golden Items and leaves him for dead. The Hardcore Leveling Warrior is killed and his level and stats are reset back to level 1. In the real world, Gun Won-Ho is a prisoner of a games workshop run by a gangster known as Chairman Kim. Gun Won-Ho plays Lucid Adventure in order to clear his debt.

Hardcore Levling Warrior begins a journey of to recover his lost level, stats and items and to earn enough money to pay back Chairman Kim. He parties up with Dark and Sora as they go on an whirlwind of an adventure.

Heart Heater is a loan shark and a high-level NPC in Lucid Adventure. He acts as a quest intermediary and is an underling of Dark. He hates idiots that can pay back the money they borrows. Heart Heater has a habit of cutting off the fingers of those who do not pay their debts and nailing it on the wall of his Quest House.

Heart Heater's loyal assistant. Alongside Heart Heater, he serves Dark as an underling

The King of Yopi Land and leader of the Eastern Alliance. He is a mysterious player that has been a thorn in Gigas side. For an unknown reason, He supports Dark's party which has put him at odds with Giga and threatens the fragile armistice that was enacted due to the war on Nightmare. The character's real name, game name and appearance are based on the author of the webtoons Taoist Land and Link Boy, Lee Doo-Yeop.

Taek is the Grand General of Yopi Land and one of Yopi's closest friends. He is known throughout Lucid Adventure for his brash attitude as well has his immense combat ability. The character's appearance and skill set carry the motif of Kim Gu, the main character of the Naver Webtoon series known as 'The Boss'. The character's name is based on Jeong Jong-Taek, the author of 'The Boss'.

Le. Rajie is a Great Demon that was de-powered and sealed in the Black Magic Dungeon by a mysterious woman. He is eventually defeated by Hardcore Leveling Warrior's party and becomes Dark's familiar. His personal goal is to get stronger and get revenge on the woman that sealed him the dungeon.

Han Gun-Soo is the vice-president of Giga and one of the grandsons of the Han Gun-Jae, the current Giga Chairman. In the game, he sends assassins to constantly kill Han Gun-Woo who is a threat to to the Giga fortune. His main goal is to win the Combat Tournament in order to gain the recognition of his father, the current acting Chairman of Giga.

Han Gun-Jae is the Giga chairman and the grandfather of Han Gun-Woo. At some point in the past he contracted an unknown illness and was hospitalised. He gathered his family in the hospital and told them to log into Lucid Adventure as he will leave his will in there. He fell into a coma soon after. Despite being in a coma, Han Gun-Jae still appears as online on Lucid Adventure. His family are currently searching for him in the game.

A South Korean multinational conglomerate that created Lucid Adventure. It is a Chaebol that is controlled by the Han family. In the Lucid Adventure, Giga operates as the Giga Empire and ensure that order is kept in the game.

The capital of the Eastern Kingdom and the kingdom of King Yopi. Yopi Land was at war with the Giga Empire but they had an armistice in order to suppress the growing threat of Nightmare.

An alliance composed of the nations within the Eastern Kingdoms. It includes Yopi Land, Azi, Ran, Eidayjuu, Teto, Irugo, Woof Woof Land and Cobalt. The alliance serves as a balance to The Giga Empire in Lucid Adventure.

Kim Sehoon has stated that he came up with the basic idea of Hardcore Leveling Warrior whilst he was studying at University. He was also inspired by several MMORPG series including Vindictus, Mabinogi and Ragnarok Online.

He wanted to create a world of escapism, where people could escape their dark realities in the real world through the game world such as Hardcore Leveling Warrior. He incorporated a lot of his personal experiences into the series.

In 2013 or 2014, Kim Sehoon already had a picture of Lucid Adventure on his blog, but he scratched it. He already had a picture of Hardcore Leveling Warrior, although the overall characters design changed by the time the series came about. The idea of logging into Lucid Adventure and the House of Beginnings was already formulated in 2013 and Kim Sehoon even posted a thread about it on dcinside.com.

The popular character known as Taek was suddenly removed from the Hardcore Leveling Warrior webtoon due to a plagiarising incident involving the Naver Webtoon series known as 'The Boss'. Scenes from a popular webtoon series known as Chan' were plagiarised by the 'The Boss'. The discovery was made by fans and posted on the internet. The plagiarised scenes were removed from the chapter and an apology was issued by Jeong Jong-Taek, the author of 'The Boss'. 'The Boss' was eventually pulled from Naver's website and has been discontinued permanently.

Due to Taek having the motif of Kim Gu, the main character of the discontinued 'The Boss', the author of Hardcore Leveling Warrior decided to stop using the character in his series. Naver released a statement in response to the situation, saying: "The character in question (Taek) is not a motif for Kim Gu, but rather a character that uses skills that are reminiscent of Kim Gu". Naver continued with: "It is not without the influence of 'The Boss', but it is difficult to say whether the character will appear in the future.The development of the story and the appearance of the character are entirely up to the artist."[1]

Many real world items were the primary focus on certain characters and story arcs.

The Series was originally translated by Game of Scanlation from February 2016 to June 2016. The series was the picked up by Hartigram then picked up the series from Episode 22. They translated it until Naver released official English translations through Line Webtoon.

There has been a lot of continued criticism of the translation quality done by Line Webtoon, as a lot of errors can be regularly seen in the translations as well as Line Webtoon unnecessarily changing the original names of characters such as changing 'Lu Bu's' name to 'Fengxian' for no apparent reason and not naming skills correctly. A lot of context is lost and plot development due to the poor translations.

In order of character appearance

Retrieved from "https://hardcorelevelingwarrior.fandom.com/wiki/Hardcore_Leveling_Warrior_(Webtoon)?oldid=29205"
Community content is available under CC-BY-SA unless otherwise noted.