All
Hardcore Leveling Tank - World of Tanks is a South Korean manhwa and webtoon series written and illustrated by Kim Sehoon. It is a brand webtoon created to promote The World of Tanks IP. The series began on 30 August 2020 and concluded October 18, 2020.

Hardcore Leveling Warrior’s team is back in Subjugation Round of the Combat Tournament. Right after the victor is declared, the God of Combat announces a new theme for the upcoming round: Tank Warfare. Find Hardcore Leveling Warriorand many other characters of Lucid Adventure experience “World of Tanks”. In this spinoff, you can expect: tanks, fantasy, tanks, humor, tanks, hohoians, tanks, special abilities coming out of nowhere, tanks and TANKS!!! 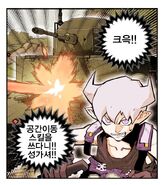 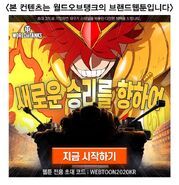 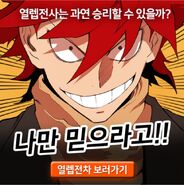 열렙전차 is a play on the regular series 열렙전사 (Hardcore Leveling Warrior).

The translation of 열렙전차 is Hardcore Leveling Tank

Retrieved from "https://hardcorelevelingwarrior.fandom.com/wiki/Hardcore_Leveling_Tank_-_World_of_Tanks?oldid=39292"
Community content is available under CC-BY-SA unless otherwise noted.