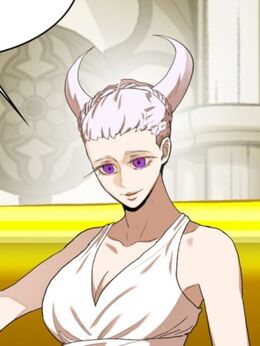 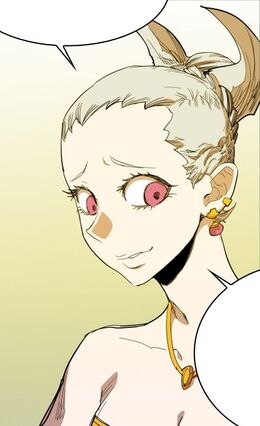 Han Soo-Ah is the eldest daughter and second child of Giga's Chairman, Han Sung-Gong. She is a Giga Group director, the current Lord of Bromorten and the head of Giga Group Mythical Division.

She was in constant competition with her younger brother, Han Gun-Soo, for their father's recognition. During the Combat Tournament, she backed Team Giga No.3 who were eventually eliminated in the Siege Round by Team Choco Bibi.

During Han Gun-Ho's attempted Coup d'etat of the Giga Empire, she was killed by Han Gun-Ho and deleted from the game

During Han Gun-Ho's attempted Coup d'etat of the Giga Empire, she was eliminated and deleted from the game by Han Gun-Ho, therefore losing all her memories related to Lucid Adventure.[1]

Han Soo-Ah is a young woman with brown hair and was shown wearing a long sleeved short rose-colored dress.

Han Soo-Ah is a fair-skinned woman with white hair styled into a bun with two horn and violet eyes.

She used to wear a long white strapless dress with a golden outline and white lady shoes. She wore golden accessories as well such as necklaces, bracelets, and earrings.

Her current attire is not that different as she wears a plain white grecian dress and the same white lady shoes. However, she no longer wore any of her golden accessories. 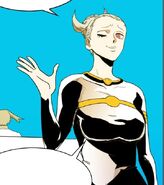 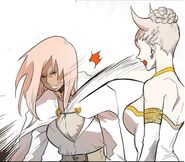 Han Soo-Ah getting ready to raid the Dragon of Evil 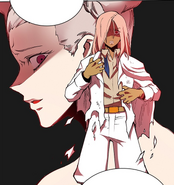 Han Soo-Ah is a prideful person that likes to gloat over other people's misfortunes such as Light's failures. She values her employees as she says that she'll make sure not to make them them regret taking her side. However, Han Soo-Ah doesn't take kindly to failures as she had fired Cocomori for losing in the Siege Round. Despite her rich girl attitude, Han Soo-Ah takes the game very seriously as this was how her father seeks pick his successor.

Han Soo-Ah's father. As his eldest daughter, Han Soo-Ah respects and obeys her father. She also desires his position as the President of Giga and want his recognition.

Han Soo-Ah's older brother. There was no interactions shown between the two but it can be assumed that as fellow supposed competitors for the succession of Giga, they don't like each other.

Han Soo-Ah's little brother. Both of them dislike one another as fellow competitors for their father's succession. Han Soo-Ah likes to tease and bully Han Gun-Soo for his failures and finds it amusing when he gets angry. As such, she is always looking for opportunities to beat him.

Han Gun-Woo is Soo-Ah's cousin. They have not been shown having any interaction but it can be assumed that Soo-Ah dislikes Gun-Woo like the rest of her family. When they met at the Combat Market, she completely ignored him.[2]

Secretary Kim works directly under Han Soo-Ah. She treats him like a servant and commanded him to first pay the cash to the Frog Merchant and then to try and pull out the Ego Sword.[2]

General Manager Song works directly under Han Soo-Ah. She entrusted the retrieval of the divine item to him and that if he doesn't mess it up, she will make sure that he won't regret siding with her.

Cocomori used to work under Han Soo-Ah as her swordsman but after Cocomori was defeated during the Siege Round, she fired her. When Han Soo-Ah caught her joining the PVP Round with the Grass Roots, she called her an arrogant bitch for daring to "bite her own master" after everything Han Soo-Ah did for her.

As a former director and heir to Giga, as well as being the former Lord of Bromorten, Han Soo-Ah is an extremely wealthy and influential figure both in the real world and in the game. Her status means she has powerful players at her disposal such as the rankers Heriach and Apple. It remains unclear if she possesses any actual combat prowess.

Vast Wealth: As a director and heir of Giga Group, Han Soo-Ah is extremely wealthy. Immediately she showed up to the auction for the Ego Sword, all the other competing players gave up instantly, knowing they couldn't compete with her financially.[2]

'한수아' literally translates to 'Han Soo-Ah' (or Han Su-a). Line Webtoon has translated her name as 'Sua Han'. This wiki will be using the correct form.