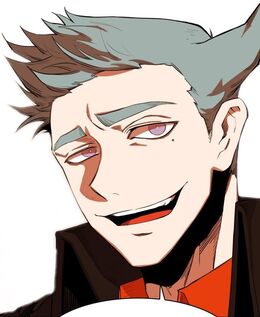 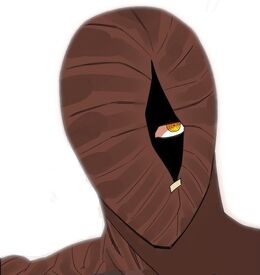 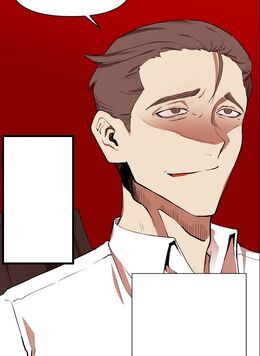 Han Gun-Ho is a Giga Game Director. He is the first son of Giga's chairman and former Giga Emperor, Han Sung-Gong. He is the the older brother of Han Soo-Ah and Han Gun-Soo. At some point in the past, Han Gun-Ho secretly joined sides with Nightmare where he serves as Queen No Name's strategist and advisor. He is often referred to as "The Crow" when he is in his Nightmare appendage.[5][6]

Four years ago, he was Giga Guild's Security Team Leader.[1] With the aid of Sad Smile, he framed Zara Guild for using Nightmare and captured Armes, which eventually led to Zara Guild's dissolution.

Two years ago, he was the Team Leader of Giga's 13th Team. He led them on an assault against Han Gun-Jae, but they were all defeated by the Creator God.

Secretly, Han Gun-Ho was working with Nightmare and was acted as The Crow, manipulating Giga and playing both sides of the war. He revealed his true identity during his attempted coup d'état against the Giga Empire.

Han Gun-Ho is a man with ash brown hair with a slicked back hairstyle and a mole underneath his left eye. He is shown wearing a white long sleeved collar shirt, dark green pants and brown shoes.

Han Gun-Ho is a young man with pale skin, teal short hair that styled into two horns, and a mole underneath his left eye like his real life self. He wears a black trench coat with six golden buttons, orange collar shirt underneath, black pants, black gloves and shoes. Sometimes, he wears the classic male Giga uniform. In the past, he wore a brown attire of cloak, robe, pants, gloves, and shoes. He was noted to be quite handsome by Armes.

Han Gun-ho is an arrogant and sadistic individual that would do anything to gain a hand in the succession war for Giga. In his eyes, having humanity is unnecessary hence why he is interested in Constant who lost all those values. In the name of power, morality should not matter, so he is willing to kill Dark and even torture and kill Helen to achieve his goals. He is heartless especially when he insulted Lucas for losing both the General Manager Park and the Secretary Park and found the situation hilarious.

He is not beyond using other people for his own ends like making a contract with Sad Smile to use his assistance later and even went as far as instigating the order of the death of Ethan in order to set back Dark. Also, he even used school kids, thugs, and even an assassin, so he can kill Dark and kidnap Helen. He even told Chung Jin not to waver, because she has killed many before and there is no room for humanity. He even instigated the influence of Nightmare onto the Zara guild in order to make sure Giga wins the absolute quest. When those people refuse his offers, he isn't beyond trying to set them up for failure or killing them as seen with Armes and Sad Smile. When Zero attacked the Combat Tournament, he simply left as if it was not his problem as if the destruction was to his benefit.

The character's name '한건호' literally translates to 'Han Gun-Ho'. For some unknown reason, LINE Webtoon has changed the character's name to 'Nathan Han'. This wiki uses the original translation which the author of the series intended.

Hardcore Leveling Warrior called him "눈깔" which literally translates to "eyeball". LINE translates this as "Cyclops". Cyclops can be written in Korean as "애꾸눈" and "물벼룩". Cyclops have one eyes so LINE just changed the literal meaning.