Nightmare Guild is a Red Player Guild that killed the players in Lucid Adventure which led to a huge war called The Very First War.[1]

The Nightmare Guild wants to destroy everything in Lucid Adventure whether it be the player or the world itself. Nightmare Guild gains power from destruction and destroys everything. That was their main quest and how they levelled up. Once a character experienced the power of Nighmare, its main attribute is changed.

There is a rank in Nightmare as Nightmare soldiers have to perform a given quest to advance to the next level. The quest must be done in a society and involves the slaughtering of citizens, children, killing innocents, looting and many other brutal acts.[2]

Nightmare Guild got more powerful, they believed they could beat the game by totally destroying the world.[2]

This led to The Allied Nation being formed between Giga, Yopi Land and the combined weaker countries.[2]

Nightmare was fortunately stopped and it has gone into an idle period.[3] 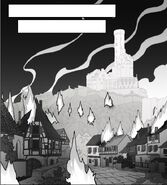 A year ago, Castle Ideizeu under attack from Nightmare (Episode 43)

A Nightmare Soldier trying to advance in Nightmare Rank (Episode 43) 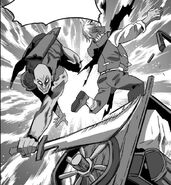 A Nightmare Soldier attacking a Citizen of Castle Ideizeu (Episode 43)

Retrieved from "https://hardcorelevelingwarrior.fandom.com/wiki/Guild_Nightmare?oldid=27025"
Community content is available under CC-BY-SA unless otherwise noted.