Guan Yu, also known as General Guan Yu and General, is a player in Lucid Adventure. He is a member of the Giga Empire and one of the 12 Generals of Han Sung-Gong. Guan Yu is a previous winner of a past iteration of the Combat Tournament. He is regularly accompanied by his trusted aide, Zhou Cang, who serves as his weapon bearer.[1]

At some point in the past, Guan Yu had a run-in with Hardcore Leveling Warrior, which led to him developing a grudge against the former rank 1 player.[1] He later developed a grudge against Sora for attacking him in Yopi Land.[2]

Guan Yu wears green armour that resembles the armour worn by Ancient Chinese Generals during the Three Kingdoms period. He has got light red skin, black hair, a long moustache and a lagre black beard.[1]

Guan Yu is an abnormally large man and chunky man. He is several times the size of a regular human.[1] 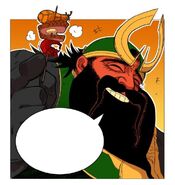 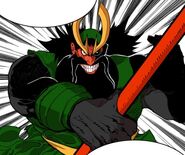 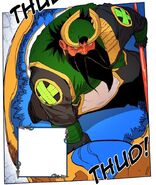 Guan Yu in comparison to Sora, a normal sized human

In addition, the General is quick to anger and quick to lash out. He starts to ambush Hardcore Leveling Warrior in a non-player killing area without thinking about the consequences or the credibility given by the emperor. The General also seems to hold grudges as he was willing to attack Hardcore Leveling Warrior for some slight in the past and still holds a grudge against Sora for punching him through a wall.

General Guan Yu's combat prowess is known throughout Lucid Adventure. His strength is so revered that when Tac said he would destroy Giga's castle during the Siege Round before Pooh Upooh's and Lime's teas go cold, Pooh Upooh wondered if Tac thought he was Guan Yu.[3]

Like other Hero Type Personal Attribute wielders, General Guan Yu can Heroize himself, increasing his stats and making him more powerful. His reputation is great enough for Heart Heater, a powerful NPC to not want to engage him in combat and flee.

It appears that there is a penalty on him when fighting and he can forcefully remove it to fight. The Penalty-Off cooldown is really long.

General Guan Yu engages in melee combat that uses slashes and tries to get into close contact. If the opponent is a bit further away, he can emit a red wave from his Guandao that is capable of splitting Rim in half and destroying multiple buildings.

He has the Heroize skill and can at it is implied he can achieve at least the first phase.[5]

Guan Yu visited to Yopi Land from a far away place. He shoved shoved his way to the front of the Yopi Grilled Skewers line, which led to Sora punching him through a wall.[2]

He then gets up and attempts to attack Hardcore Leveling Warrior with his Guandao but he avoids it and he ends up cutting Rim in half and damaging the buildings nearby.

The party of Heart Heater, HCLW, Sora and Rim escape him with the help of a Grabert.

He is later seen in The Three Kingdoms Conference Room of Giga, observing Hardcore Leveling Warrior's Team vs Fengxian's Team in The Siege Round of The Combat Tournament. He still holds a grudge against Sora.

Retrieved from "https://hardcorelevelingwarrior.fandom.com/wiki/Guan_Yu?oldid=29247"
Community content is available under CC-BY-SA unless otherwise noted.