Grabert is Heart Heater's famous Dragon.[1] He is often used as a mode of transport for Dark's Party. 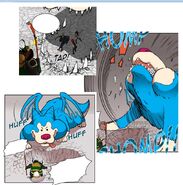 Grabert was first seen saving Heart Heater, Sora, Hardcore Leveling Warrior and Rim from General Guan Yu, putting all of them in his mouth and flying to Dragon Mountain Hut.[1]

According to Heart Heater, Grabert is the fastest Dragon.[2] The Beard Gang's base was pretty far but Grabert was able to carry Dark's Party there in a short time.[2] Grabert's speed does not seem to be hindered by having multiple people in his mouth and he is strong enough to carry the weight.

Grabert seems highly durable but can be stunned by Ant-Air Missles but recovered quikcly enough to pull out another Dragon from Hohoian Lake.[2]

Retrieved from "https://hardcorelevelingwarrior.fandom.com/wiki/Grabert?oldid=22107"
Community content is available under CC-BY-SA unless otherwise noted.