"God of Death" redirects here. For other uses of this name, see God of Death (Disambiguation).

Episode 107
The God of Death was one of The Four Gods of Lucid Adventure. Legends say that the God of Death is eager to be rid of the other Gods which will bring forth her world of chaos.[1] She chose Team Open Your Mouth, Here Comes the Healing as her representing team in the Combat Tournament for the title of Absolute God however her team lost in the Semi-finals of the Combat Tournament.[2]

The God of Death killed the God of Blessings and was eventually consumed by Zero. She ultimately died as a result.[3]

The God of Death supports a large frame, with mostly of her body covered in black hair. From her lower body, it is fully filled with hair, while having muscular legs that of a goat. Her upper body resembles of a burly women, sharp fingers and a head made of black fur, only having the large maw of jagged teeth left uncovered. 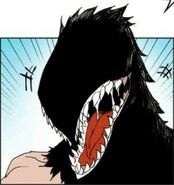 She is power hungry as she accepted the Nightmare power without hesitation, thinking that she can control it but ultimately failed.[5] She wants total freedom and chaos as she doesn't care about anything so long as she could achieve it. She didn't care if God of Blessing became the Absolute God of Lucid so long as she could stop following her father's orders and do what she wants.[6]

The God of Death's creator and father. She doesn't seem to care about him at all as when he told her and the other Gods that he was dying, she simply replied "Great" as her response, only coming to him when he proposed on who will be the next Absolute God.[7]

She is very tired of following her father's orders forever and was willing to let God of Blessings be the next Absolute God just so she could defy his orders and be free.[6]

The God of Death knew her brother, God of Combat, to the point that when she proposed something during the semi-finals that she knew God of Combat would agree to. Though she was completely unaware of God of Combat's suspicion and eye on her. [6]

When God of Combat made another bet, she sided with the God of Blessings which confirmed his suspicion.[8] When she lost the bet, God of Combat tried to claim her life for siding with Nightmare but couldn't as she was consumed by Zero.[1]

God of Death despised her brother, God of Blessings, from the start. When he proposed that he become their next Absolute God, God of Death openly expressed her desire to kill him at that moment. They almost fought until God of Combat stopped them.[4] During the PVP Round, God of Blessings made a comment on her team but she called it idiotic and hasty judgement.[9]

Gods of Time and Space

They were siblings and appeared to be on good terms and respected each other although the God of Time and Space berated her for wanting to rush the tournament and her implication to just let the God of Blessings be the new Absolute God.[6]

During the finals, God of Death told the Gods of Time and Space to make the right choice as well when she sided with God of Blessings for half of their father's power.[8]

God of Death supposedly chosen team. Team Ultimate Healer were the ones that gave God of Death the essence of Zero that was suppose to "empower" her.[5] When Ultimate Healer lost against Light, she asked God of Death for permission to use Nightmare but was quickly denied and was ordered to do it next time.[2]

As one of the Gods created by Han Gun-Jae to watch over Lucid Adventure, The God of Death was one of the absolutes in the game. As the divine being that represents death, she supervises the death of all users and NPCs and every death-related skill falls under her sphere of influence. Though she had stabbed him from the back, the God of Death easily pierced through the God of Blessings divine body and devoured him.[1]

The Breath of Death: Shoots a large-area toxic breath that melts an opponent's body when in contact

Blessings of The God of Death: Grants a player the ability to revive a second time, a curse keeping their HP from reaching 0.

Judging from her appearance, the God of Death most likely had a brutish and savage fighting style.

The God of death, was created by Roy Han serving to overseer the world along with its siblings for thousands of years.[10]

The God of Death briefly appears along with the other gods when they heard Roy Han's call through the God Messenger.[7]. Grouping up they debate on who becomes the next Absolute God. When the God of Blessings wanted to take on the role, the God of Death had the urge to kill him.[4].

They then decide to pick a team to represent them and fight in the PVP round. The owner of the winning team will become the next Absolute God.[11].

It was revealed that the God of death, chose Team Open Your Mouth, Here Comes the Healing, to represent her in the tournament. The God of Blessings warns her that her team might face his in the next round to which God of Death told him that he spouted hasty judgement and called him idiotic.[9].

During the selection of which groups would fight in the semifinals, God of Death's team was chosen to fight against Team Light, the God of Blessings told her that she already lost to which God of Death replied to as bullshit.[12].

When her team lost, She prohibited Open Your Mouth, Here Comes the Healing to not using her nightmare powers and thus lost. The God of Death gritted her teeth and cursed as she accepted her loss.[2].

During the match between Team Taoist and Team Dark, the God of Death proposed that the finals should take place immediately instead of three days. The other Gods were surprised by this with the God of Blessings liking what she just proposed and the Gods of Time and Space berating her. She explained that their father also took part in the tournament and that it was clear who he wanted to win, which was Team Dark. She added on that it was clear who would win if they were given time to recover. That though they may be Gods, they are just their father's creations carrying his orders forever. So long as they break the cycle, she doesn't care who becomes the new Absolute God.[6].

The God of Death is seen sitting on her throne along with the other Gods.[13]

After the God of Combat suggested the new bet with the God of Blessings, the God of Death, who was very delighted, stated that she wanted see someone using Nightmare fight against someone who had surpassed humanly limits, adding on that this was truly a battle between them and their father and that if their father wins, they'll never get another chance. She sides with the God of Blessings and that if they win, the God of Combat should be ready to face the consequences and she had warned the Gods of Time and Space to choose their side wisely.[8]

After Team Dark won the tournament, as well with the absence of Roy Han, the Gods decided to finally fight over the title of Absolute God. While God of Blessings was preparing for the fight, the God of Death stabbed him from the back, killing and devouring the God of Blessings. She then reformed into Zero and ultimately died as a result.[3]

This was a flashback to after the agreement on becoming the next God in the PvP round. In this flashback is The God of Death, selecting Team Open Your Mouth, Here Comes the Healing as her team. Being very serious for them to win, since she believed that only herself is worthy of God and the rest of her siblings are weak. Despite the team using Nightmare, she still chose them.[1]

While conversing, she received a seed of Zero's essence in which she absorbs it, and in doing so Zero slowly consumed the God of Death.[1]

After the death of the Gods and Zero, the power of The Creator which Han Gun-Jae wanted to tried to hand over to the four Gods, the inherent power of the four Gods had, and the power of the world core that belonged to Zero all combined and formed a huge energy that rained down throughout the entire Lucid Adventure similar to snowflakes. New world rules such as Sleepwalking were generated.[14][15]

Despite the death of the God of Death, the concept of death as a whole didn't disappear from Lucid Adventure and remained much like the concept of time.[16]