For other uses of this name, see God's Hand (Disambiguation).

Episode 90
God's Hand is a divine item in Lucid Adventure.

This is the hand that God cut off himself.[1]

The Hand of God is made of divine flesh that cannot be penetrated even by The Master Blacksmith's 'bug weapons'.[1]

Zero is constantly trying to create a weapon powerful enough to kill God and used the hand to test her created weapons.[1]

After her defeat by Han Gun-Jae, Zero tried spreading a curse through his body that would destroy his core and lead to Lucid Adventure's collapse. Han Gun-Jae managed to dismember his own arm before the curse spread.[2]

The dismembered hand came to be in the possession of Zero.[1]

Zero created An Unnamed Master Blacksmith's Weapon and gave it to a Nightmare dummy to test it on God's Hand.[1] The arrow shot from the Nightmare weapon did not leave a single blemish on God's Hand, which angered Zero.[1] 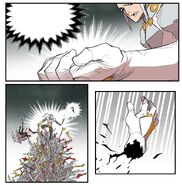 Han Gun-Jae cutting off his hand 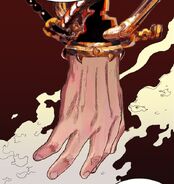