God's Armory are is an armory that contains Divine Weapons summoned by Choco Bibi during the Siege Round. The Armory contains a Divine Sword as well as Divine guns and explosives.

The Armory contains a giant Divine Sword that is blue in color as well as guns and grenades. The Divine Weapons contain Holy Power which cause extra damage to Devils.

In order for Drip Soup to use the giant Divine Sword, he needs to use God's Hand.[1]

The Divine Guns & Grenades can be used by Tempest because his 2nd Job is Holy Shooter which allows him to use Holy Weapons in battle. The Summoned 5 Angels can use the weapons because they are Holy Warriors from the Divine Realm. The Holy grenades explode in a crucifix shape and leave a crucifix emblem in the ground as an after effect, alluding to the skills Divine origins.[1]

The Angels were able to weaken Octonash's Master Devil Shield with the Divine guns and the grenade was able to destroy it completely, shocking Octonash.[1]

The Divine Sword was capable of damaging Octonash and lowering her HP even further.[2]

Tempest's Holy Explosion with one of the Holy Grenades was capable of destroying Todish's head and even managed to damage half of Rigos' helmet.[2]

An Angel using a grenade imbued with Holy Power (Episode 38) 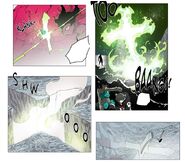