Episode 11
General Manager Park is a Manager in Giga Group and a member of The Giga Empire in Lucid Adventure. He works directly under Vice-President of Giga, Light.

He was in a Giga Team that competed in The Combat Tournament and was defeated by Team The Ultimate Healer during the PvP Quarter Finals Round.

Alongside other Giga employees, he defended Lakiren Castle from New Nightmare but was ultimately killed.[1] His avatar has since been resurrected as a Nightmare Soldier, preventing him from logging back into the game.[2]

General Manager Park is a young man with green hair and wears round eye glasses. He also wears the classic male Giga uniform which consists of white short coat with a leather belt wrapped around it in his midsection, cream colored collar shirt underneath the coat, white pants, cream colored gloves and boots, white collared cape around his chest and golden lion shaped shoulder armor on his right shoulder. When he was nightmarized, his attire took a darker theme. 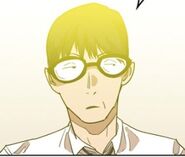 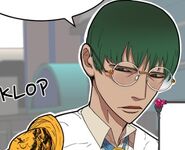 General Manager Park is rude, arrogant and disrespectful towards people that aren't a part of Giga. He rudely insulted Yopi land when he was visiting and almost killed an NPC child for daring to touch him. General Manager Park thinks very lowly of NPCs as he ridicules Yopi Land again for putting NPCS on the same level of treatment as players. He finds it insulting when he was being teamed up with mercenaries that Light hired for the PVP Round and refuses to be regarded as useless and discarded.

General Manager Park's superior. They are not on good terms as Secretary Kim mocked him for going on a rant against the Vice President and called him out for his past actions.

The recruit that General Manager Park hired. He appreciated Manager Park 38 for joining Giga Games and that he's glad talented people like him joined it. He had even personally helped Manager Park 38 get adjusted in Giga and recommended him to a team in the Siege Round.

General Manager Park's superior although they entered Giga at the same time. They're friend and are casual to one another, as he told Secretary Park to not patronize him as they both entered the company at the same time and were planning to go to a sauna before they were both nightmarized.

General Manager dislikes him for treating NPCs equally and fears him. He was scared when Yopi threatened him to stop insulting his NPCs and thought he was a crazy bastard.

General Manager Park regards Dark as "Mr. Carter Han" and sees him as a bonus and promotion. It can be assumed he thinks lowly of him as Light despises him as well.

General Manager Park sees Hardcore Leveling Warrior as a noob and no longer one of the best but he is still wary of him as Hardcore is a "unpredictable bug character" and attempted to kill him with full power.

Sad Smile gave General Manager Park a "gift" but the latter didn't know anything and thanked him regardless.