The Flying Dolphin looks like a dolphin. It is light blue in colour with light blue eyes. it has a large pair of light blue-coloured and white wings. It has light blue flippers and a light blue fluke at the end of it's persons.

It has a transparent torso with a pink coloured crystal in its centre. It has large yellow fins attached to it's back. 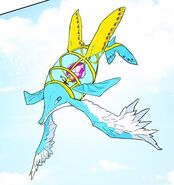 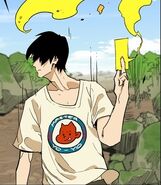 The Flying Dolphin is capable of flight and is used as a transportation method by Yopi. It is capable of carrying at least 5 human sized entities in its torso.[1]

Yopi, Lime, Sora, Master Swordsman and Drip Soup were in the interior of the Flying Dolphin when Choco Bibi tore open the enclosed space that Pooh Upooh had been taken to. Yopi called the summon back into his card once he landed on the ground.[1]

Retrieved from "https://hardcorelevelingwarrior.fandom.com/wiki/Flying_Dolphin?oldid=25348"
Community content is available under CC-BY-SA unless otherwise noted.