The Weapons of The Dead

Enchant Magic: The Weapons of the Dead is an Enchantment Magic used by Dark.

Dark enchants his summoned skeletons with weapons. The weapons are in the form of a purple energy and can be in various forms such as swords, axes, daggers and spears.

As he is about to face Heart Heater, Dark uses an enchantment magic to equip his 5 Summoned Skeletons with various weapons. The skeletons are then easily dispatched by Heart Heater.[1] 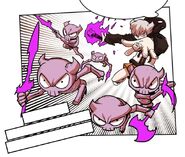 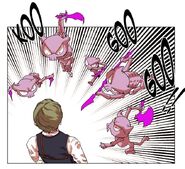 Retrieved from "https://hardcorelevelingwarrior.fandom.com/wiki/Enchant_Magic:_The_Weapons_of_the_Dead?oldid=12361"
Community content is available under CC-BY-SA unless otherwise noted.