Elixir Plant is one of the guilds in Lucid Adventure

It's a guild made up of the elderly, but they are not just any old people. They are carefully selected players among a huge number of senior players. They are ranked second after Giga.[1]

The Dragon of Light who went dormant after getting injured in the long battle with the Dragon of Evil felt a shift in the balance of the world and chose Elixir Plant and started to give them powers.[1]

The Guild used to be pacifist, but ever since the dragon chose them, they had to actively get involved in whoever ruled Lucid Adventure. They currently own about 25% of Lucid Adventure.[1] 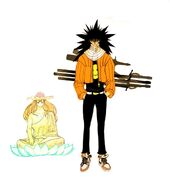 Retrieved from "https://hardcorelevelingwarrior.fandom.com/wiki/Elixir_Plant_Guild?oldid=29036"
Community content is available under CC-BY-SA unless otherwise noted.