Elena is a player in Lucid Adventure. She was the Ranked the 11th strongest player under the Giga Ranking System. She has a close friendship with the Coma.

Post time-skip, Elena joined Dark Land along with Coma. During The Great War, she was ranked no.12 under the Lucid Ball Ranking System, but her rank went up to 11 after she subjugated the Nightmare in Ketoru Castle with the help of Coma. 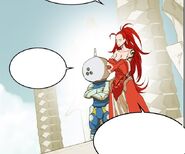 As the Rank No.11, Elena is one of the strongest players in the game. The true extent of her combat abilities have not been shown but she is undoubtedly strong.

During the Great War, she was able to almost single handedly defeat all the Nightmares in Ketoru Castle that included a Ukang Ukang, a legendary rated Named Monster. It should be noted that she was aided by Coma. On his death, Ukang Ukang was shocked at her power saying "t..this is...a ranker...".

Summoning Skills: Elena is able to use summoning skills. She summoned two puppets during the battle against Nightmare on the Tomb of Swords.[1]

Earth Manipulation: Elena is able to manipulate the earth. She summoned a rock from the ground to block a Nightmare tendril attack that was aimed at Dark.[1] It is unclear if she summoned it directly or did through one of her controlled puppets.

The characters name, '엘레나', literally means 'Elena'. In Episode 146, she was called 'Elena' (엘레나, ellena). In Episode 147, she was incorrectly called 'Helena' (헬레나, hellena). It appears that the author made an error in the latter episode because he called her 'Elena' in Episode 172 and has been referring to her as Elena ever since. LINE Webtoon continues to mistranslate the character's name as 'Helena' despite the authors correction.

Retrieved from "https://hardcorelevelingwarrior.fandom.com/wiki/Elena?oldid=34730"
Community content is available under CC-BY-SA unless otherwise noted.