Ego used to be a golden slime with a single green eye. He morphs sword or a spoon whenever Sora uses him. He also turns into a massive mouthful of teeth whenever Sora is angered. When Ego devoured the Light Sword of Will, he can now morph into a Greatsword and he now has a miniature body wrapped in blue bandages.

When Ego grew, he copied the appearance of the God of Combat. He has back length hair, emerald eyes, has ocean colored bandages wrapped around his limbs, and leaving his chest bare. 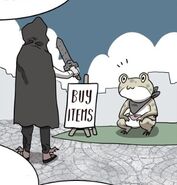 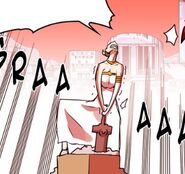 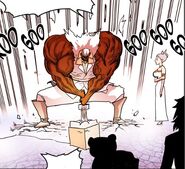 Kim failing to pull out the sealed Ego Sword (Episode 26) 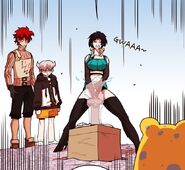 Sora failing to pull out the sealed Ego Sword (Episode 27)

Cocomori failing to pull out the sealed Ego Sword (Episode 27) 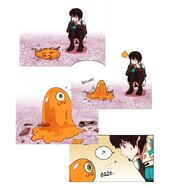 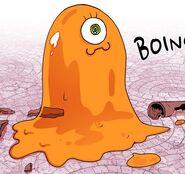 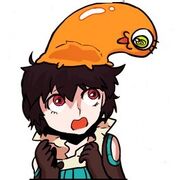 Sora using Ego to block a kick from the Master Magician, Light (Episode 34) 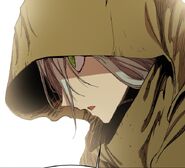 The Sword of the Hero - Ego

As Sora's Ego Sword, Ego has taken on the characteristics of Sora's Taster Personal Attribute and is always hungry.[2][3] He eats anything he can get his mouth on such as swords[2][4] and people that are a threat to Sora.[4] He is very fond of eating iron weapons.[3] Ego is extremely protective of Sora and always tries to defend her when she is in trouble.[4][5]

Over the timeskip, Ego started going through a puberty like phase. He began to walk and talk and even think on it's own. He developed a rebellious nature which led to him and Sora taking some time apart[6] although they reunited in the end.

Ego's owner and "Mother". Ego recognized Sora as his "Mom" when he was unsealed from the sword. He cares about Sora as he becomes mad whenever she's harmed or when she feels angry as well. Two years later, he grew a rebellious nature and had an argument with her. They separated from each other for a time until he cried out for Sora when he was defeated by Hephai.

Consumption Empowerment: Ego can grow in power based on what it eats.

After Sora was promoted to a Great Sword Knight, she was granted the ability to upgrade Ego once. This gave Ego the opportunity to be fused with a weapon of Sora's choice. Sora fed Ego the Light Sword - Will, which led to Ego evolving into a Ego Sword -Will.[7]

Ego became a weapon that absorbed the hero's will. His status and item effects became the same as two items combined.[7]

The attack power of Ego depends on Sora's state of mind. The blade of Ego won't come out if there's anything wrong with Sora's determination, courage or righteousness.[7]

Two years later, Ego grew in power and size, even making his own human form, based on the appearance of the God of Combat.

Humanoid Form: Ego had morphed itself into a human form with the appearance of the Combat God and is capable of fighting by itself in this form.

Sua Han, Kim, Sora, and Cocomori all failed to pull out the sealed Ego Sword. When it was Drip Soup's turn the sealed sword suddenly broke and a yellow liquid came out of it. Unbeknown to most of the observers, Cocomori had used Weapon Break when she couldn't pull the sword out. Everyone left believing the sword was worthless. The yellow liquid became a one eyed blob and Ego was born.

During the 14 year year time skip (2 years in reality), Ego began to walk and talk and even think on its own. As it went through puberty, it had a little argument with Sora and so they decided to have some time apart.[13] Ego's current whereabouts is unknown.

Ego is still hungry even after consuming the low-level swords. He spots a weapon shop in the forest and approaches it. Ego meets Hephai at the weapon store and praises her weapons. He eats one of Hephai's weapons and then flees, giggling in delight as he does so. Hephai catches up to him and flings him on the ground.[1]