Kim Jin-Woo[2], also known as Drip Soup in Lucid Adventure [1], is a current member of the Grass Roots Guild.

Drip Soup is a well-built young man with unkempt orange hair and eyes. He wore a white croptop with a large stand collar and orange outlines, white pants and brown boots. He has three large brown belts surrounding his midsection. He used to wear long white sleeves as well. 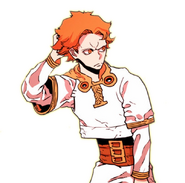 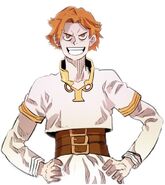 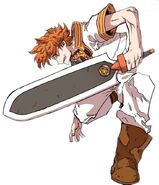 Drip Soup with his Ego Sword, the Three Attributes 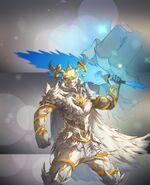 Drip Soup was first shown to be a competitive, a bit boastful and direct person. He angrily competed with Cocomori for the Ego Sword and openly expressed his hatred for Giga in front of her and Han Soo-Ah.

Drip Soup cares deeply about his friends as he had a loud argument with Pooh Upooh, berating her for saying that they "can't" do anything. He does not care for anything that jeopardizes his friend's health as he also told Pooh Upooh why does Choco Bibi have to suffer for their emergency, which was the Giga Empire invading Yopy Land territories.

He is very determined as well when it comes to helping his friends as he stated himself that he went through hell to get the treatment for Choco Bibi's eyes from a powerful field boss monster, Renjia.

He is always willing to show off his skills towards other people to show how strong he is and his improvement. Despite wearing a serious expression all the time, he's actually quite a happy and friendly person though he is not knowledgeable regarding a lot of stuff as he would often ask people to explain things for him even after it was explained numerous times.

Drip Soup's teacher and close friend. Master Swordsman took him under his wing and trained him to become a powerful swordsman. He is amazed by Master Swordsman's power and aims to become like him. Although Drip Soup teases and scolds Master Swordsman for his inability to speak with girls, resulting in no one joining their guild, he still holds him in high regard.

Drip Soup and Choco Bibi are close friends. Both being a part of the same guild and team. Despite that Drip Soup wasn't part of Choco Bibi's group from Zara Guild, Choco Bibi calls Drip Soup 'Bro' like the others and Drip Soup refers to Choco Bibi as 'Bibi' for a nickname.

Drip Soup cares about Choco Bibi enough that he got mad and got into an argument with Pooh Upooh for refusing to help Bibi with his eyesight. He and Tempest went through hell to get the solution and cure for Bibi's eyesight problem.

Drip Soup and Tempest are close friends as well. Both being a part of the same guild and team. Despite that Drip Soup wasn't part of Tempest's group from Zara Guild, Tempest refers to Drip Soup as "Bro" as does the latter. He also calls Drip Soup "Soup" as a nickname.

They have both protected and avenged each other multiple times. Drip Soup pulled back Tempest from getting near Octonash, berating him that he shouldn't get close as a ranged shooter. When Drip Soup initially died, Tempest exploded himself and said that he has avenged both Drip Soup and Choco Bibi's deaths.

Tempest stopped Drip Soup from arguing any further with Pooh Upooh and proceed to get the solution that Mage Nutella told them about for Bibi's eyesight. Drip Soup had asked Tempest if he was seriously being offended by Nightmare Tempest at all. Along with Bibi and Cocomori, he also think Tempest is a know-it-all.

Drip Soup and Cocomori are good friends. At first, they were enemies as they competed with each other for the Ego Sword and Drip Soup even defeated Cocomori during the Siege Round. When Cocomori joined the guild, Drip was highly suspicious of her, asking her what her true goal is until he was interrupted by Master Swordsman. In time, they became close friends as Drip Soup even called her "Big Sister" that one time.

Being part of the same guild, they are good friends and have known each other for a long time.

At first, they were fellow competitors for the Ego Sword although Drip Soup didn't hold any hostilities for her. They both regard and respect each other as fellow swordsmen. Drip Soup was worried when Sora was using a crappy sword and asked her what happened to her Ego Sword.

His tune soon changed however when they fought for a second time, he was shocked to see Nightmare Drip Soup perfectly imitating his Paladin form and thought that it wasn't fair when he started to lose against his nightmare counterpart despite using the same holy attribute. He was even more utterly shocked when Nightmare Drip Soup awakened as an Angel Knight and madly questioned just how he could summon the Sword of God easily.[3]

Drip Soup was a Holy Swordman who then turned into a Paladin/Holy Knight which made him able to combine his holy attribute to his swordsmanship. He and Tempest are the only ones who are capable of wielding divine weapons from the divine realm. Drip Soup is a physically strong combatant as he served as one of the tanks during the Subjugation Round and is an aggressive fighter, often charging into the fight head on.

After two years, he trained under the Best Swordsman, sharing their skills like teacher and student. His swordsmanship improved, able to block a heavy attack from his Nightmare Doppelganger with a single hand. He was now able to merge his Ego Sword and Holy Attribute with himself, giving him a new transformation that enhances his attacks with powerful divine fire.

Swordsmanship: Drip Soup's swordsmanship is skilled and strong, training under the tutelage of The Best Swordsman. He was even able to defeat Cocomori, who had an overwhelming sword spirit, during the Siege Round. He was able to quickly destroy the strong robot, Super-GSM2, with his Ego Sword. Drip Soup was able to block Nightmare Drip Soup's two handed attack from above with his blade with just one hand.

Drip Soup's transformation whenever he merges with his Ego Sword, wearing full feathered plated armor and coating him in divine fire. In this form, he is able to inflict Divine Fire Holy Fire which latches unto the target once comes into contact. It causes a large burst of divine fire and the opponent cannot recover or regenerate from the attack.[6]

Divine Fire: Which is also known as Holy Fire, are flames that latches unto the opponents and that then creates a large burst upon contact. These flames negate regeneration.

Drip Soup transforms with the help of Tempest's Blessings of the Dead. This transformation is only 50% of its true form which is the Paladin Form but it is able to give Drip Soup an incredible amount of power that he was able to easily kill Secretary Park who was one of the top rankers with an unskilled attack despite the latter blocking his attack with his legendary weapons.[7]

Drip Soup's personal attribute is the Holy Attribute, which is a class-type that allows him to deal with holy mana and become a Paladin/Holy Knight.

Drip Soup awakens as The Angel Knight, Angel of the Holy Sword - Michael, and transforms in a blaze of holy fire as his entire being is alighted with an orange glow. His hair begins to flow like fire as he is crowned with a white halo and his eyes burn with fire as well. Two wings of fire burst behind his back, representing a blazing pair of wings. Drip Soup withdraws his upper armour as his body is marked with glowing white lines and his hands flare up with holy fire as his Ego Sword completely merges with him.[4]

Sword of God: With only his fiery fists alone, Drip Soup is capable of summoning an enormous blazing version of the Sword of God with ease and utilize it to smite his opponents, burning and exploding them with godly fire.[4]

Flight: With his blazing wings, Drip Soup is capable of flying at high speeds, levitate and stand in mid-air as if he was standing on solid ground.[4]

Drip Soup's Ego Sword is called Three Identities that allows him to wield skills of three different attributes. When merged with Drip Soup, it cloaks itself in divine fire and cloaks his right arm as well.

He is also able to combine his divine power with three attributes with the Ego Sword. Drip Soup is in perfect condition when he is merged with his Ego Sword.[6]

Drip Soup is a swordsman and fights with a rather large sword so he fights using wide ranged attacks all the time.

He is an aggressive fighter as he's always charging into the fight and quickly seeks to fight whenever he recovers. Drip Soup often combines his holy attribute with his sword attack for increased power.

Retrieved from "https://hardcorelevelingwarrior.fandom.com/wiki/Drip_Soup?oldid=50770"
Community content is available under CC-BY-SA unless otherwise noted.