In her humanoid form, The Dragon of Light has long white hair, white eyebrows and green horns. Her body is covered with light green-like scales and she has large lizard like tail protruding just below her low back.[7] She has white sclerae, light green irises and black pupils.

From the little we have seen of her dragon form, she has multiple horns and large scale like protrusions coming out of her body. 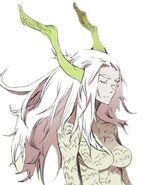 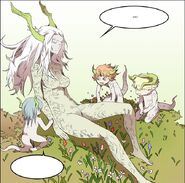 Dragon of Light (Humanoid Form) with her children

A glimpse of The Dragon of Light's Dragon Form 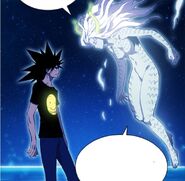 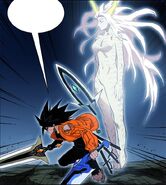 Dragon of Light preparing to move against Nightmare

The Dragon of Light appears to be in a pensive mood most of the time. She cares about Lucid Adventure and was so worried about it's destruction, that she broke the rules and summoned Stone directly into the game to save it. She talks with her eyes closed most of the time.

As can be seen during her first conversation with Stone, she has a habit of referring to herself in the 3rd person.[3]

Dragon of Light had three baby dragons that called her "mother". They appear to be close to her as they rushed to her for comfort after being scared by the energy released into the world as a result of the death of the Gods.[7] 14 years later, her children are grown enough to be able to take part in the war against Nightmare.[8]

The Dragon of Light chose the Elixir Plant Guild and started giving them powers after she felt a shift in the balance of the world.[5]

Principal is the Guild Master of Elixir Plant, the Guild that Dragon of Light started giving powers to after she felt a shift in the balance of the world.[5] Principal was chosen by the Dragon of Light because of her morally upright disposition and her wanting to lead the game to the right ending.[10]

Dragon of Light has a deep relationship with the Stone. She broke the rules when she forcibly summoned him from the real world while he was dreaming in order to save the world and promised to let him see his mom in a dream if he completed the mission. Stone agreed to become a warrior and was placed in the Elixir Plant Guild directly by the Dragon of Light. She then gave Stone was class and his warrior swords Stone was not confident that he could handle all of The Swords of the Five Warriors, but she was encouraged him and placed him in the Elixir Plant Guild where he could be nurtured to become the strongest player in the world. She also granted him his personal attribute.[3]

Ge Des noticed that Stone was being protected by the Dragon of Light during their fight. In fact, Dragon of Light appeared on the battle field to support Stone directly. She aided him multiple times while he faced the Nightmarized Ge Des by releasing him from Nightmare's mental attack and protecting him from Ge Des's potentially fatal attack. After Ge Des was defeated, Stone showed concern for the Dragon of Light who was exhausted breathing heavily after expending all of her mana to aid him.[6]

The Dragon of Light is wary of Nightmare. She is aware that Nightmare under the leadership of No Name is trying to open the door to the real world which could lead to both world's collapsing. It is because of Nightmare's growing threat that she most likely started supporting the Elixir Plant Guild and also summoned Stone to the game.

The Dragon of Light thought Ge Des was extremely dangerous. when he Nightmarized, she directly intervened in the battle to help Stone and exhausted all her mana in that form to aid Stone in defeating him.[3][6] After his defeat, Dragon of Light said stone had overcome "the greatest mountain", showing how dangerous she believed he was.[6]

It is unclear if they had any direct relationship. Haru was aware that her form was being held together by the Dragon of Light's mana.[6]

The exact relationship between the Dragon of Light and the warriors is not clear but they appear to be intrinsically linked to one another. Dragon of Light had The Swords of the Five Warriors in the Dragon's Treasure House.[3] She also was able to make Stone a Warrior and give him the Warrior's Emblem.[3]

Her relationship with the Gods and Zero are unknown but she welcomed the "New World" that was about to begin after their destruction.[7]

She is the Co-ordinator of the world who is responsible for making sure things are functioning in Lucid Adventure. Although she appears to be restricted with respect to how much she can directly intervene in matters concerning Lucid Adventure, she can support people and aid them indirectly to help her achieve the outcome she wants.

As one of the prime beings in the game, she can directly interact with the real world and forcibly summon dreaming people into Lucid Adventure against their will, effectively breaking the rules as well.[3]

“The Dragons began to move.”
― Narrator

Ever since the Dragon of Light and the Dragon of Evil fully recovered, they began to move. Their sudden activity caused four castles of New Nightmare to have been destroyed and more than 300 Nightmares have perished under their onslaught. Such is their tremendous power that their clear and distinctive mana could be felt from thousands of miles away as No Name sensed it from Lakiren Castle.[11][12]

Dragon of Light's Clone - Messenger (빛의 용의 분신 - 전언자, bich-ui yong-ui bunsin - jeon-eonja): The Dragon of Light can create a clone of herself and send it out as a messenger. The clone wore a helmet and was covered in armour. It also had white wings made of feathers. Her doppelganger was powerful enough to face off against The Dragon of Evil who had 100% control over Heart Heater's body. Once the message is delivered by the clone, it dissipates[9] The exact mechanics of how the clone was created has not been revealed. It is unknown how much of the Dragon of Light's power can be used by her clone

Power Bestowal: The Dragon of Light is able to grant powers to people. She gives powers to Elixir Plant Guild.[5]

Rule Bending: As one of the prime beings in the game, Dragon of Light is able to bend the rules of Lucid Adventure. She was able to forcefully summon Stone directly into Lucid Adventure while the latter was dreaming and warned the latter that he would be deleted by 'The System' if he messaged his mother as it was against the rules.[3]

Projected Form: Dragon of Light was able to project a form of herself behind Stone in order to support him.[3] In this form, it is presumed Dragon of Light is not in her complete form as she said that she that it was hard to stay in "this form" without much mana. Presumably the amount of power she actually has in this form is reduced. This will be updated when more is revealed in the webtoon. "This form" could mean her humanoid form or it could mean projected. It is unclear.

The Dragon of Light has not been seen in direct combat as of yet. She has been seen acting as a supporter to Stone when the latter fought Ge Des.[3][6]

As the Gods died, the resulting energy could be felt by the Dragon of Light and the Dragon of Evil in their respective domains. She had welcomed the New World that would soon begin.[7]

At some point, the Dragon of Light felt a shift in the balance of the world and started to grant her powers to the Elixir Plant Guild.[5]

Summoning The Chosen One

With her power, The Dragon of Light forcefully summoned Stone to Lucid Adventure while he was dreaming and introduced herself as the "Co-ordinator of the World". She asked Stone to become a warrior to save Lucid Adventure from destruction. The elated Stone was happy that he could see again and tried to contact his mother to tell her that his accident was not his fault but the Dragon of Light stopped him and warned him that he would be deleted from the game if he is discovered by 'The System' as she broke the rules by summoning him to the game.[3]

Stone agrees to do what she wants and the Dragon of Light tells him that she will let him meet his mother in his dream once he completes his mission of saving the world. She summons the The Swords of the Five Warriors from the Dragon's Treasure Houseand tells Stone that she has prepared a guild to make him stronger. She grants him a personal attribute directly and the Warrior's Emblem appeared on Stone's neck.[3]

As a last resort, she tells Stone to release his last sword and Haru descends.[3] Haru's form is maintained by the Dragon of Light's mana and she goes on to defeat Ge Des. Once Ge Des is defeated, Dragon of Light is visibly strained and is panting hard after expending all of her mana.[6] She tells Stone she needs to rest after expending all her mana and disappears.[6]