Episode 176
Dark Land is the capital of the Northern Kingdom. It was founded and is currently ruled by it's King, Dark. It was originally founded as a guild, then after it recruited enough members, the Royal Seal was used on the expanded guild territory and it became a country.[1]

Two years after it's inception, Dark Land has has become a nation and has vastly expanded its territory.[2] It has united small sized guilds of various backgrounds and controls 9% of the expanded Lucid Adventure.[3] Due to being located in the North, the weather in Dark Land is always cold and it is always snowing.[4]

Sometime after the Combat Tournament, Dark came up with the name 'Dark Land', which was approved by Heart Heater, Sora and Rim. A

Irregular named monsters are being generated in the fields around Dark Land's territories more often and it is believed that it has something to do with Nightmare.[2]

Gurland under the orders of No Name, invades Dark Land.

Although Dark Land is considered the 'weakest' guild, it is more because it has the smallest army of the Four Major Guilds. Despite the small numbers that Dark Land possesses, the guild is a formidable threat that even Giga acknowledges.

It houses numerous powerful unranked players such Lu Bu and Sora all of which are hinted to be equivalent of a Top Ranker and Dark alone has shown to be capable of destroying an entire guild by himself.

Hohoians who ride the dragons called Grabert and together, they form the aerial defense of Dark Land.

Dark Land has united various small sized guilds of various backgrounds.[1] Although none of these allies have been revealed, we know it has allies in 'The West' who Dark himself went to defend directly, when they were being attacked by the Green Blood Mercenaries.[5]

Dark Land and the Grass Roots are great allies who have assisted one another on multiple occasions. They share the same goal of finding and saving Hardcore Leveling Warrior.

The Giga Empire is Dark Land's biggest threat and one of it's competitors for the control of Lucid Adventure. As an heir to Giga Group, Dark had been caught in Giga's cross hairs since he joined Lucid Adventure. While Dark was trying to recruit guild members, the people trying to get to Dark Land were slowed down by Mana Flies, who were implied to have been sent by Giga.

As one of the established guilds, Dark Land is also participating in the Absolute Quest and it is currently one of Giga's targets.[6]

New Nightmare is one of the competing guilds for the dominance of Lucid Adventure.[3] No Name sent Juto Gurland to conquer Dark Land but he was defeated by King Dark's party.[7]

It is unknown whether Dark Land and Yopi Land are actually enemies but both are fellow competitors for the control of Lucid Adventure. 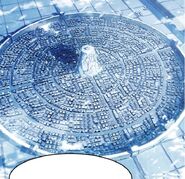