Episode 5
Dacon[1] is an NPC of Combat in Lucid Adventure. She is the older sister of Schub and a former underling of the God of Combat.[1][3] She could be seen rushing from place to place in order to referee PvPs.[4]

After the God of Combat perished, Dacon perished too. She was reincarnated as an NPC of Combat, losing her memory by the will of the world.[2]

Dacon is an angel with small wings and unkempt short rosy hair. She has a brown eye patch covering her left eye and she wears a leather catsuit that exposes both sides of her midsection, black metallic gauntlets, leather straps on both arms and legs that held her blades, and black boots. 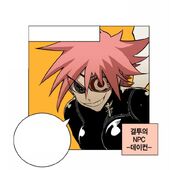 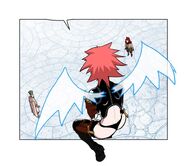 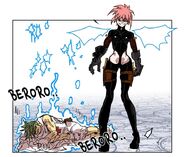 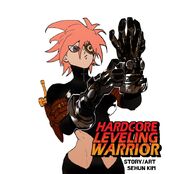 Dacon seems to get a kick out of refereeing PKs as she can be seen with a big smile on her face everything she is summoned to oversee one.[1][5][2]Dacon is also a workaholic as she never rests and rushes from place to place, overseeing PKs. She is always in a hurry to referee the multiple PvPs around Lucid Adventure and is keen for them to be finished promptly.[4][6]

She likes to keep things in an orderly fashion and doesn't like people who disrupt the order. She finds it disgusting when people send her over a hundred mails like what Choco Bibi did.

After her rebirth, her personality has not changed much although she now serves the "Will of the World". rather than the God of Combat.

Dacon's brother. She is more well known than Schub to most players as the latter is lazy. Dacon doesn't like it when Schub is being lazy as she had scolded him for not watching over God of Combat. She also seems to not like it when Schub eats her cake.

As an NPC of Combat and a direct underling of the God of Combat himself, Dacon has the authority to referee Formal PKs. The full extent of her abilities have not been revealed.

Lucid Adventure Knowledge: As an NPC of Combat, Dacon has a working knoowledge of the class restrictions with respect to rewards in a PvP situation. She knew Hardcore Leveling Warrior's class allowed him to take stats as a reward, something that a lot of players did not seem privy to.[1]

Adjudication: As an NPC of Combat, Dacon has the ability to referee PKs between players, monitor the fights and ensure that the rewards agreed upon are properly distributed.[1][5]

Flight: Dacon can fly, levitate and stand in mid-air as if she was standing on solid ground.[1][4]

Dacon has not been seen in full combat.