“You have to use it carefully. It's an attack that can kill a God”
― Han Gun-Jae[source]

The Last Card,[1][2] officially known as Creator Gods' Blow,[3] was a skill card used by Yopy.

A card that re-enacts the blow of the Creator God, Han Gun-Jae.[3]

With the Last Card, Yopy is summoned the most powerful entity in the game, 'The Creator God', Han Gun-Jae.[2] Under Yopy's command, the summoned Han Gun-Jae delivers blows to the target(s) that is strong enough to kill even a God.[2][3]

When he was at the Purple Phoenix Nest, Yopy was given this card by Han Gun-Jae in order to confront Zero.[4][3]

Yopy preparing to use his Last Card

God of Combat stops Yopy from using his Last Card 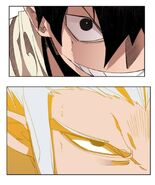 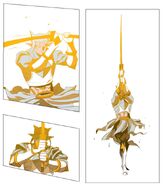 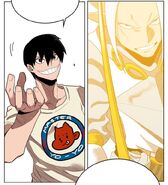 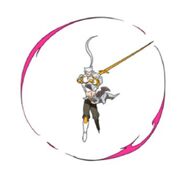 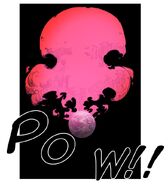 The explosion caused by the death of the Gods and Zero

창세신의 일격 is translated as Creator's Blow by LINE Webtoon.

창세 is the Korean form of the Hanja 創世, which means "creation of the world". It is the act of creating the world for the first time, or the time of the creation.

의 means the suffix -’s. It Indicates that the previous word has possession of the next one. It functions like the English suffix “’s”, or like the word “of” with the position of possessor and possessee switched. So basically "X's ball" or "Ball of X".

일격 is the Korean form of the Hanja '一擊' which literally means "one blow; strike". It is an act of making one attack or such an attack

LINE also called 창세신 'The Creator' instead of Creator God in Episode 174.