Sad Smile
Contractor is the Transcendental Skill Type Personal Attribute of Sad Smile. It is the familiar of Sad Smile.[1]

The Contractor is a shadow like entity with a single white eye that has a white sclera and multiple yellow irises with black reptilian like pupils.

It has furry like monster hands and usually uses a giant pen when signing a contract on behalf of Sad Smile. It hovers behind Sad Smile when it is summoned.

The contractor has multiple arms and is ambidextrous as it was seen using it's right hand and left hand to write up contracts on behalf of Sad Smile.[2][3]

A 'Contract' is a fulfilment of the mutually agreed terms. The Contractor allows Sad Smile to make three contracts simultaneously. If Sad Smile makes a fourth contract, the Contractor devours him and he is gone.[3]

The Contractor has the power to temporarily slow down Sad Smile's death and if Sad Smile's character, it perishes as well.[3]

The First Contract Allowed him to use the Space Magic Skills of the ranked Space-Time Magic Master, Philip. He was in Sad Smile's work place by coincidence.[3]

The Second Contract is his characters life. In the early days of Lucid Adventure, Nathan Han pierced his heart with one of Zero's Nightmare daggers and defeated him. As his character was being deleted, The Contractor temporarily stopped his death and told him that he could live by making a contract with the one who killed him, Nathan Han. Sad Smile ended up signing a contract with Nathan Han to survive which led to him being controlled by Giga.[3]

The unknown favour was revealed requires Hardcore Leveling Warrior to kill Dark with his own hands during The Combat Tournament. This was ordered by Giga.[3]

The Contractor appeared next to HCLW, warning him that if he attempts to tell Dark about Chairman Kim's plan, he would kill him first before he got the chance as Dark is connected to Giga and it could ruin Chairman Kim's plan.[4]

The Contractor appeared just before the PvP Final, this time wielding a red scythe. It beheaded Hardcore Leveling Warrior because he was planning to go against Giga in the final which violated the terms of their agreement. This made HCLW's level and stat reset to Level 1.[5] 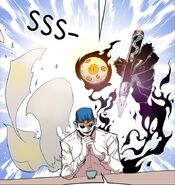 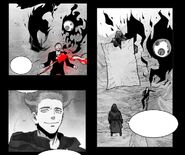 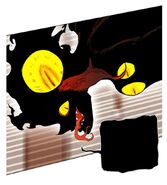