After the two year timeskip, he joined Lucid High and is currently a freshman in Class 4 alongside Dark, Lu Bu and Werewolf.[1]

Choco Flavoured Potato Soup is a very small player with grey coloured hair and a patch on his head.His head is disproportionately larger than his body. He has no sclera and has black eyes. He wore generic outfit befitting his low level, with a brown coloured long sleeve T-shirt and black trousers and no shoes.

When his character was being controlled by Zero, he later wore a blue long sleeved T-shirt with black trousers and brown shoes.

He carried a dagger on his left side.[5]

Two years later, Choco Flavoured Potato Soup has grown in height and his head is in proportion to his body. He still retains the large black eyes and has bluish hair with a pink tint. He wears a blue robe with a hoodie.[1] 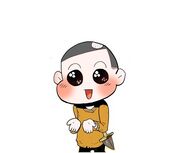 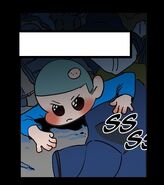 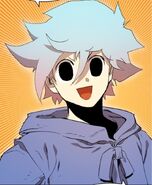 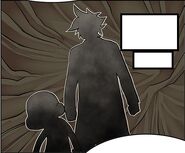 A comparison between Chota's current avatar and newbie avatar 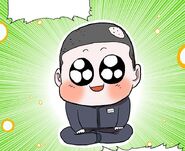 Although not much is known about Choco Flavoured Potato Soup's personality, he appeared to be extremely naive, as he was unaware of Hardcore Leveling Warrior's reputation while asking him for some money.[5]

Two years later, Chota seems nervous and stutters when introducing himself to Dark. Despite being at a low level, he was still determined to contribute in some way to the group which is why he wanted to carry the Nightmare Core and pestered Dark until he let him have it. As noted by Lu Bu, he is very persistent.[1][6]

Chota is in the same class and assignment group as Dark. Dark thinks his nickname, Chota is weird. Chota was nervous on his first meeting with Dark.He appreciated Carter Han letting him join the group and thinks he's a really nice guy, which Dark thought was cringy.[1] Chota was in awe of Dark's strength when he defeated Gurland's Nightmare Soldiers.[6]

Chota is in the same class and assignment group as Lu Bu. Chota was asked to join the group because Dark insisted they needed on more person. Lu Bu protected Chota from Gurland's attack and thinks Chota is persistent.[1][6]

Chota is in the same class and assignment group as Wolf . As the new student in Lucid High, Chota was invited by and Wo[7]lf to join their assignment group because Dark insisted they needed on more person. Wolf is very protective of Chota and chastised Dark for acting coldly towards him when he was running late.[1]

After his PK, he tried to log back into Lucid Adventure but could not as Zero had hacked his account which led Chota to not play Lucid Adventure for two years. It was due to this that Chota remained at such a low level.[1]

At the start of the series Choco Flavoured Potato Soup was a low level player that was very weak and naive.[5] Due to not playing the game after he was PKed, two years later, he is still a low level player.[1] Despite being extremely weak, Chota holds the distinction of being the only known player to defeat the Rank No.1 Hardcore Leveling Warrior. In reality, it was Zero who hacked his account to defeat Hardcore Leveling Warrior. It was due to this that Chota acquired the title The One Who Defeated the Rank No.1.

In Season 2, due to his extremely low level, Chota was too weak to face any of the enemies his group has encountered and has to stay at the back where he can be protected by his teammates.

After retrieving the divine item from the Tower of Abstinence, Chota began training and levelling up rapidly with the aid of his title. Sometime after the Summit, He became level 47. He was able to defeat multiple Goblins and even defeat a Level 80 Goblon by himself.[8][9]

Swordsmanship: Chota was taught basic swordsmanship from Sora. She taught him that During his fight with the Goblins, he was able to defeat multiple Goblins with a sword.

Tactical Skills: Chota is able to quickly think of any tactics in a fight and even analyze his opponent's tactics quickly.

Choco Flavoured Potato Soup's past has not been revealed, but at some point he created a Lucid Adventure account and managed to raise his character's level to level 3.[5]

After getting PKed, Min tried logging into Lucid Adventure again but he couldn't. He did not play for a while after that.[1]

Two years later, Min joined Lucid High fairly recently and became part of Class 4. He was put in an assignment group that included Dark, Lu Bu and Wolf. Chota logged into Lucid Adventure late to meet his assignment group. He watched as they took down the Nightmarised monster and was eager to contribute to the group by holding on to the Nightmare Core despite Dark's initial reluctance. The group is attacked by Gurland and Chota is saved by Lu Bu, but drops the Nightmare Core in the process which is then picked up by Gurland.[1]

After Gurland's head is blown off by Dark's Bear Hunt, Chota catches the dropped Nightmare Core. Chota watched in awe as Dark destroyed Gurland's Nightmare Soldiers. After Gurland was destroyed, the remaining piece of him stabbed Chota and Nightmarised him, turning him into a form that resembled Rank 1 Hardcore Leveling Warrior.[6] Gurland engages Dark and Dark attempts to capture him. Gurland then sends Nightmare Servants to attack the Castle and they are stopped by the returning Sora. Sora then goes on to defeat Gurland by splitting him in half.[11][12]

Chota is separated from Gurland and is quarantined by Heart Heater's Anti-Nightmare Quarantine Device. He is taken to Quest House to recover and the relieved Hohians speak to him but he does not understand what they are saying. Chota rejoins the group and a piece of Hardcore Leveling Warrior's Lucky Coin is pulled from his eye by Dark. Rim then informs the group a VVIP person is coming for a meeting with Dark. Scott Yang then walks through the door of Quest House, asking if they know about the idol incident.[13]

Chota approached Heart Heater after reaching Level 40 as Heart Heater had requested. Heart Heater told Rim to take Chota to Yopi Land in order to get his personal attribute unlocked. Rim took Chota to Kusham Store to meet Hola. They are greeted by Kusham and Hola came out and said that Chota's personal attribute is unique and is a new kind that came after the Gods disappeared. She tells him that his personal attribute is a Sandbag Slime. Rim explains to Chota that a Sandbag Slime is a type of slime that that can save an enemy's skill after they hit you with it and that the slime can't hold out against strong attacks and die. He tells Chota that as a user with this skill can die and come back to life. Chota gets a bit excited and Hola tells him that if if he was lucky a strong opponent might hit him and he could save some of their skills. Chota remembers that the Rank No.1 Hardcore Leveling Warrior PKd him when he was a noob. Rim theorises that once his personal attribute is unlocked, he might be able to use Hardcore Leveling Warrior's skill.[14]

One week later[14], Chota accompanies Dark, Lu Bu, Werewolf to the Tetivera Mine