Season 2 Episode 71
Charming Castle was the 20th Castle of the Giga Empire.[1] It was destroyed during the battle between Stone and Ge Des.[2]

The Charming Castle was built to tackle the 90th section of the Absolute Quest. It looks small and shabby on the outside, but it's was very important castle where secrets that other guilds are unaware of are kept.[1]

Xiang Yu used to guard it, but after he was deleted by the Dragon of Evil, forces under the direct command of the Emperor started guarding it. However, when the forces were secretly away fro a strategic transfer, an incident took place in which Nightmare raided the castle.[1]

Despite the intervention of multiple rankers from various guilds, Charming Castle was eventually destroyed by Demon King Ge Des.[2] 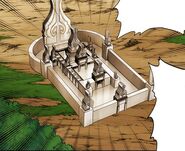