Yoon Gyu-Sik, known as Cave in Lucid Adventure, is the former second in command of The Beard Gang and is currently ranked No.10 in the Lucid Ball Ranking System. He betrayed the Beard Gang and made a good haul before he left, saying that stealing wasn't fun anymore after the rules of the world had changed.[1]

After being accused of flirting with his girlfriend, Cave had a PK with the 102 Ranked Dumpling Prince. After defeating the 102 Ranker, Cave's Lucid Ball Rank went from 2033 to 459.[1] By the start of The Great War, Cave's rank had risen to Rank No.10.

Cave is a grey skinned man with a lean build and red hair that styled into a low long ponytail. He is shirtless and wears dark pants with fur, and purple shoes with fur underneath. 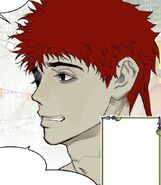 Cave is a cunning and deceitful person. To him, fun is all that matters as whilst he was playing in the guild he joined, he became the Vice Guild Master of the Beard Gang and when he got bored of it, decided to destroy the guild, kill everyone and take the gold they earned.

He was able to deceive his guild into thinking he was a good person that wanted their guild to be the best before killing all of them. Cave is a well known hustler. As such, he seeks challenges and uses unscrupulous methods to win.

Cave was Big Beard's Vice Guild Master. Unlike Big Beard who harbored feelings for him. Cave didn't think much of her at all and played with her feelings. He deceived her and made her think he was a good person and falsely promised with her that they'll make their guild the best. He thought she was being ridiculous being in love with him in a game.

Cave and Lu Bu fought each other some point in the past. According to Cave, he had defeated Lu Bu with ease and "owned" him. Cave said that Lu Bu made some progress and improved after their fight with the Nightmare Chimera.

As one of the top 10 rankers and the Ranked No.10 Player, Cave is one of the strongest players of Lucid Adventure. He is a deceitful and sly combatant as he often bluffs his strength and lie about it in order to get the upper hand in his fights. He was able to defeat Lu Bu who has the strongest hero-type personal attribute, Lu Bu and according to him, it was a one-sided duel.

Not much is shown of his combat capabilities but Cave is capable of defeating dozens of Dummy Nightmares who are reinforced with the power of a High Ranker, to the point of making a pile of bodies out of them.

From what has been seen so far, Cave is a melee fighter that uses defensive spells to protect himself. He is a sly combatant as he prefers to fool his opponents regarding his abilities and when they fall for it, he immediately takes advantage of it, stabbing or attacking them from behind.

His specialty is the 'Chaos Combo', combination of his Ego Sword and his personal attribute. Not much is known about this combo.[1]

Hustler: No details have been revealed about this personal attribute.