Season 2 Episode 80
Catan[1] is a member of the Giga Empire. She was present at Lion Heart Castle when it was invaded by the Anti-Giga Coalition.[1] Alongside Sword Gate Guardian and the Big Gate Guardian, she was tasked with preventing Yopi from entering Lion Heart Castle's front entrance.[1] She was decapitated by Yopi.[1] 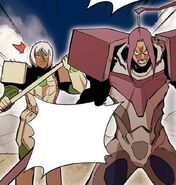 The full extent of her abilities have not been seen, but the fact that she was one of the 3 people tasked with stopping Yopi from entering Lion Heart Castle indicates that she has some degree of strength.[1]

Spearman ship: Catan used a spear and appeared to be proficient with it.[1] Her slash was able to inflict shallow wounds on the Dark Warrior's Helmet buffed Yopi.[1]

Catan fought with a spear when she was fighting Yopi.