Episode 91
Brand New Alibag was a Red Player that is wanted for 31 kills. She was a member of the Brandish Trio.[1]

She was eventually defeated and captured by Sora who manage to create a new skill due to their fight. She is imprisoned along with her fellow associates.

Brand New Alibag is an extremely large dark green crocodilian with an orange mohawk and only wearing blue ripped pants. She may not look the part but she is actually a female player. 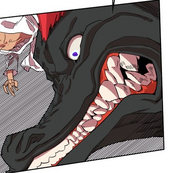 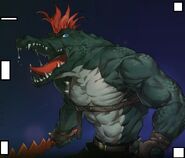 Brand New Alibag is a violent and greedy player which led her to becoming a Red Player. Even after being put in jail, she still committed multiple killings soon after. She is a capable and brutal fighter as she was able to easily defeat Sora twice. One of which she used her teeth to bite Sora, incapacitating her.

She also doesn't like it when people say that female players should have pretty characters or be beautiful.

Too Much Calcium and Cutie Minky

She was a member of their Brandish Trio. According to her, they've stolen more than half her share last time and threatened them if they do so again.

Brand New Alibag thought Sora was bad at fighting as she kept making predictable moves and defeating her twice. She was a bit surprised when Sora started to tell her thoughts to her before she was defeated.

Brand New Alibag was one of the most wanted Red Players in Lucid Adventure which implies how dangerous and strong she was.

Brand New Alibag was a member of the Brandish Trio and was one of the most wanted Red Players according to the Best Swordsman. She has the most records of kills amongst the group.

Brand New Alibag was introduced looking at a carriage carrying "Cobalt Ores" alongside Cutie Minky and Too Much Calcium. She threatened them if they took more than half her shares before attacking the carriage, but it turned out to be a trap by the Best Swordsman. The Brandish Trio then fought with The Best Swordsman, Drip Soup and Sora.

Brand New Alibag then fought Sora for three rounds and defeated her twice. She mocked Sora for being predictable and lectured her about girls having to wear pretty clothes and such. She tried to prevent Sora from buffing up but Sora grabbed her blade and blew her back. She was then defeated by Sora's new skill and put in jail.[2]