Black Magic Dungeon is a Dungeon made up of three floors. It is possible to pass the Job Advancement for the Dark Magician Class if the Dungeon is cleared.

According to Jang Kim, the Black Magic Dungeon is surrounded by a protective barrier.[1]

According to Doyom, only a party of three may enter the Dungeon.[2]

Doyom, the Black Magic NPC, welcomes parties to the Dungeon.[2]

The Dungeon is made up of Three floors. The first floor has 100 Zombies lead by a Zombie Boss.[1]

The Second Floor is the floor has the monster Bogor, who is controlled by a Witch.

The third and final floor has the Archfiend, Lazie, who was sealed there after his defeat by Zero.[3]

The Dungeon was destroyed by the Cyborg Assassin sent by Giga. It is not known if the Dungeon has been fixed.[4] 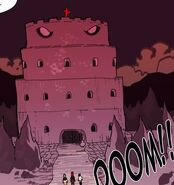 Retrieved from "https://hardcorelevelingwarrior.fandom.com/wiki/Black_Magic_Dungeon?oldid=28068"
Community content is available under CC-BY-SA unless otherwise noted.