The Bier Litter stabbing Ge Des with it's ethereal energy

Ge Des ensnared by Gangrim and the Bier Litter

Ge Des sealed and sent into the abyss

상여가마 is translated as Death Carriage by LINE Webtoon.

상여 is the Korean form of the hanja 喪輿, which means "bier or funeral bier". 가마 means "palanquin or litter" and is pronounced "gama" in Korean.

The literal translation of 상여가마 is Bier Palanquin or Bier Litter. It can also be called Bier Gama. 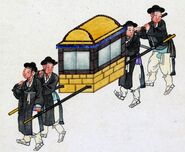